No water action for me yesterday. This is a photo by Jimmie Hepp from this gallery showing the effect of a footstrap failure and the size that the NW swell reached at Hookipa. 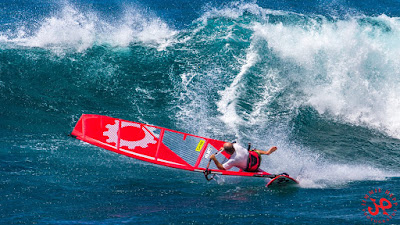 3am significant buoy readings
South shore
No indication of southerly energy at the buoys, the Surfline forecast calls for 0.9f 15s as a new SSW swell is predicted to pick up.
Here's how Pat Caldwell describes the fetch history: A large area of gales to storm-force winds in the southern Tasman Sea 4/15-17 is expected to give a long-period swell locally from 208-220 degrees starting late Monday 4/23. The PacIOOS/CDIP Pearl Harbor Entrance buoy shows a trace of 16-18 second energy. Surf should hold within background to near the summer average 4/24-26 with a downward trend 4/27-28.

Below is the collage of the maps of April 15, 16 and 17 that might help following his description. I will be on the Lahaina side quite early, but I'm not sure I'll be able to post a report. If there, for sure the new energy will be very inconsistent.

4.5ft @ 7s from 58° (ENE)
4.4ft @ 13s from 315° (NW)
3.6ft @ 9s from 72° (ENE)
The graph of the two reported buoys below shows that the NW swell peaked yesterday afternoon in Kauai and so we can deduce that it peaked during the night in Maui. As a result, it will slowly go down in size all today and tomorrow before a new very similar swell hits Friday/Saturday, coinciding with a change in the weather pattern that should see the formation of a trades-killing low north of the islands. 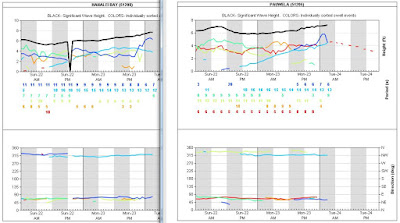 North Pacific shows a fetch in the NW corner, the main part of which is directed to the mainland. There's also a NE windswell fetch, but I forgot to circle it.

Similar situation in the South Pacific, this time the main part of the fetch is aiming at South America, but the very tail (and hopefully some angular spreading of the swell) is aimed at us. 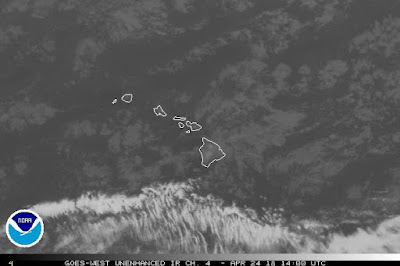