Yesterday by 11am I had already done SUP foiling, SUP and shortboard sessions. All of them at Thousand Peaks and none of them particularly remarkable, because the size and period was too much for the spot. 90% of the set waves were closeouts, but there were also some gems. I got a couple of the SUP, one on the shortboard and none on the SUP foiling. But that's because of my very high standards of judging the waves. Everybody else was stoked instead. Most surfers, give them the size and they're happy...

Here's Dave Kalama on a perfect foiling wave, for example. Photo by Destination 360. 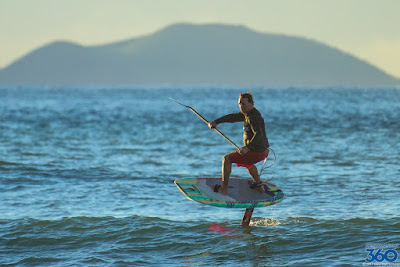 This other one instead shows Hi Tech owner Kim Ball on a wave with way too much white water. Still fun, but not as much as a blue water wall. Thousand Peaks like chest high and 12-13s. Yesterday it was head high and 17-18s. 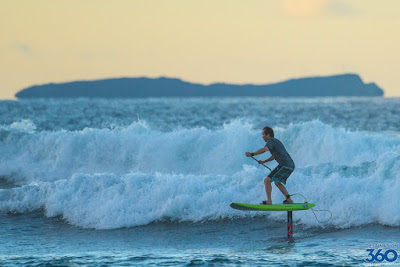 The SSW went down a tiny bit both in size and period, but not by much. This swell totally surprised me with its energy. And I got a feeling it surprised also Pat Caldwell. This is how yesterday he brilliantly analyzed the origin of it:
PacIOOS/CDIP southern-exposure buoys off Oahu and Lanai showed the long-period swell of 18-22 seconds fill in 10/10 and hold 10/11. The energy is dominant from the Tasman Sea angle of 208-220 degrees, though elevated from 180-200 degrees as well. Thus, there are overlapping events.
Hindcasting one can see a massive bulge of seas to 35 feet between 50-60S to the SW of Tasmania 10/2 that progressed eastward 10/3 to the SE of Tasmania at a distance over 5000 nm away.
At the same time 10/2-3, additional high seas above 30 feet were seen S to SE of New Zealand. This pattern slowly settled down 10/4 with seas to 25 feet in the Tasman and New Zealand windows, then dropped 10/5.
Give the extra-long, dominant wave periods in the 18-22 second band 10/11 in Hawaii, and the nature of wave dispersion, or the spreading out of swell trains as a function of wave period, with longer waves traveling faster, this should mean still elevated surf locally 10/12 as the dominant wave period slowly shifts downward. This event is expected to drop to near the average Saturday morning and below average late Saturday as a new event arrives.
North shore
Pauwela
5.1ft @ 9s from 46° (NE)

Just windswell at Hookipa, but good direction and decent period, so there will be fun waves to ride, also thanks to the lack of wind in the early morning.
Wind map at noon.

North Pacific has a NW fetch.

South Pacific has a fetch that resembles the one that created the current swell. The red circle shows the wind directly aimed at us, the blue one the ones aiming east of us out of which we will hopefully get some angular spreading energy. South Pacific continues to provide. Excellent season, no doubt.