A shortboard and a SUP foiling session for me yesterday. Here's a couple of shots from the early morning.

Kirby got a nice one. 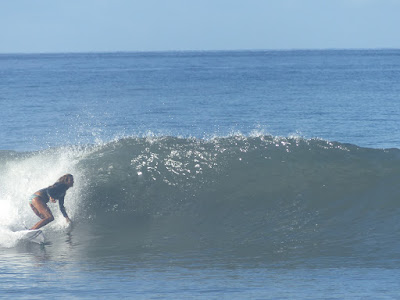 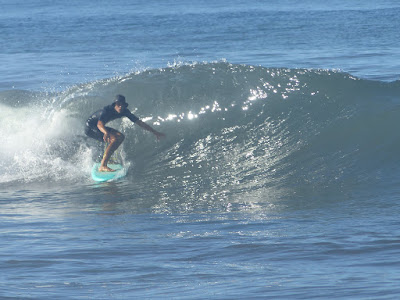 Awesome numbers at the buoy, today might be even bigger than yesterday on the south shore.
A blog reader at the beach remarked that I didn't really announce this swell. I replied, "well, if you look at the buoys, you know there's a swell!", but he was 100% correct, as it surprised me too. I had to go back to the fetches map and, with the help of Pat Caldwell, try to spot the origin.

Here's what he said: On 10/1-3, an area validated by JASON altimeter with seas well above 30 feet SE of New Zealand should be the source for the next new pulse locally. It should fill in Wednesday to levels above average, peak early Thursday, then slowly drop into Saturday from 180-200 degrees with added Tasman energy from 208-220 degrees.

Below is the maps of Oct 2 and 3, the newly drawn black circles are the origin of this swell and I completely overlooked them, as fetches in that position oriented towards us don't happen that often and the great circle ray map doesn't reach down there. 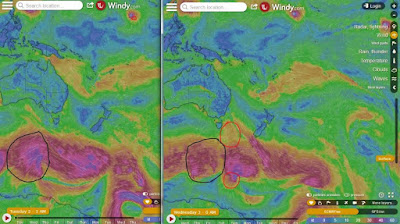 3.4ft @ 11s from 59° (ENE)
Hilo
6.3ft @ 12s from 93° (E)
I'm not convinved anymore that the 11s energy is from the NW as I wrote yesterday. I got to trust the buoys more I guess, at least Pauwela. I will do that today, and so what's up there is what you'll find in the water at Hookipa and on all the north shore. Sergio's swell still pumping if you have access to a east facing shore.
Wind map at noon.

North shore has a decent NW fetch, the windswell one and Sergio's that now is moving back to the east.

That's a powerful fetch down under, unfortunately New Zealand will block a lot of its energy, but not all. This is the first of a long series of good fetches that will keep the south shore alive (more like pumping, really) in the long range. It's been an excellent summer so far (at least when I was here) and it's far from over yet. 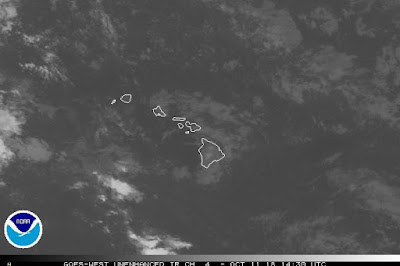