Two SUP foiling sessions for me, one with the short and one with the long mast. I'm not ready yet to post a review of the long one, but one thing I can tell already: it takes time to get used to it.

Here's Gofoil founder Alex Aguera on his newly shaped 5.2 using one of the two advantages of having a long mast: you can put the board more "on the rail" because the wind is buried deeper in the water and the tip of the foil won't break the water surface. The other obvious one is that you have more play before overfoiling. Those advantages come at the price of some disadvantages, but I'll talk about that later. For now, I decided to use the long mast for a month and then switch back to the short. Only then I'll know which one I like better. All the good guys (Dave Kalama included) say that once you got used to it, they only use the long one now. Photo by Tomoko. 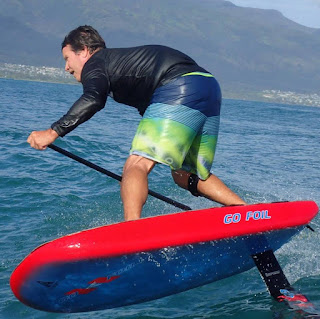 Meanwhile at Hookipa the pro's put up a great show in waves that were still overhead to start with and became head high towards the end of the day, with challenging very light sideoff wind. Photo by Jimmie Hepp from this gallery. 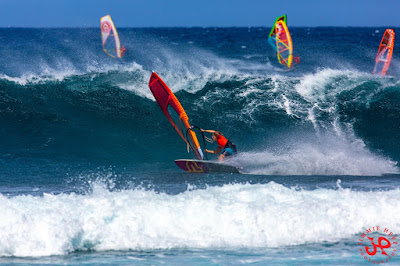 1.4ft @ 16s from 187° (S)
Old very long lasting south swell is down to 2f 12, but there's new low long period energy in the water at the local buoys, which will probably provide some fun size waves, hopefully up to waist high. The threat is the southerly wind flow that might make conditions choppy and crumbly. Not sure if I will go, as I haven't made up my plan yet.

3.7ft @ 4s from 84° (E)
2ft @ 13s from 348° (NNW)
0.4ft @ 20s from 7° (N)
Old NNW swell clocking in at 2f 13s and declining, so it's going to be tiny in the morning. New NW swell on the rise and already 6.6f 16s at NW101. Below is the collage of the NW101 and Pauwela graphs and the Surfline forecast. NW101 recorded around 5f 16s at midnight. By applying GP's rule of thumb for calculating the travel time (16h@16s +/- 1h per second), that energy should be here around 4pm, so it seems that the swell is early compared to the forecast. That, together with the predicted switch of the wind from a SW direction (see below), could give Hookipa possible excellent surfing conditions at sunset.

Wind map at noon. The previous maps show calm everywhere until around 10am. The strong southerly flow to our west is only predicted to squeeze through the mountains and get on the north shore in the form of Kona wind only at sunset.

North Pacific has a weak NW fetch and the windswell one.

I did a full Windy.com run to see what's coming and the only exciting thing I found is that massive fetch that takes the whole Atlantic ocean. I'm sure the Big Wave World tour is looking at it. I'm not an expert of that part of the world, but the waves at Nazare might be the highest ever recorded there. The date is Tuesday 6, so a couple of days later. 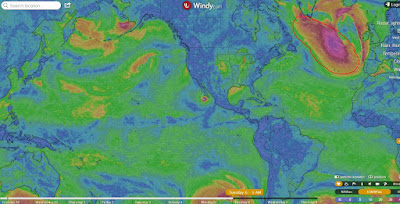 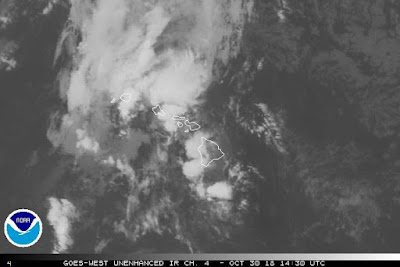 So far, we've been lucky with the rain, but it's right around the corner.