Shortboard, windfoiling and SUP foiling sessions for me yesterday. This is one wave of yet another epic sunset session on the south shore. The south swell was already hitting.


I was testing the long mast from Gofoil, I'll do a full review when I'm done. I can only anticipate that the immediate feedback was pretty much opposite in the two foiling disciplines I tried. I'll leave you the guess even though this photo might give it away. 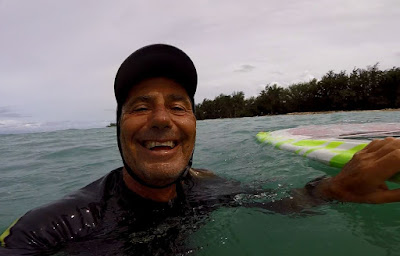 1.9ft @ 14s from 198° (SSW)
South swell is here. Surprisingly it wasn't even particularly slow yesterday. Let's see how Pat Caldwell describes the fetch that generated it.
A severe-gale to storm-force system moved from S of New Zealand 10/12 to SE of New Zealand 10/13 with a large area of seas growing above 30 feet. The associated low pressure center moved steadily east along 65S the slowed in pace as it settled near 150W 10/15. A fetch of over 1500 nm long and 1000 nm wide formed between the broad area of low pressure south of French Polynesia and a strong surface high pressure over the Tasman Sea. The strongest winds were during the onset 10/12-13 though gales to severe gales held on 10/14-16 over the 175-200 degree band with the head of the fetch to near 3500 nm away. Such a large source means a long- lived, well-above average event.
Now, let's see it. Below is the collage of the maps of Oct 11, 12, 13, 14. I could have kept going until today included. This is going to be a week for the records. I'll report early as I have business to do. 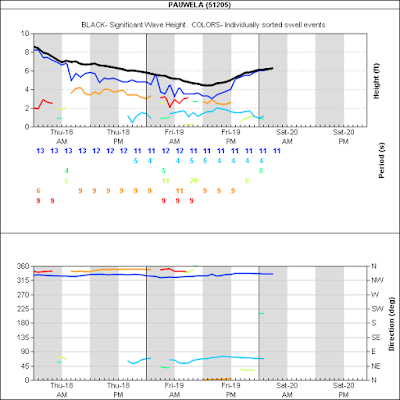 North Pacific has a bit of a fetch in the NW corner and a hint of returning windswell fetch.

Morning sky. Almost out of those clouds. 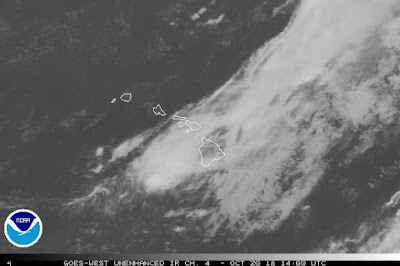