A longboard and a SUP foil session for me yesterday. This photo shows the excellent conditions at Hookipa thanks to the light offshore wind. Plenty barrels on offer. 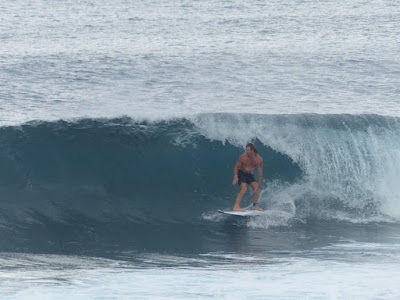 This is a photo from two days ago when the foiling conditions already improved compared to the previous big day with a lot of water moving, but they were still far from perfect.

Well, they were yesterday. Waist to chest and absolute glass in the light of a gorgeous sunset. It was relatively slow too and the water all around the wave was incredibly still and clear. And the lines that all of the above allowed had some poetry in them, of a kind that I found difficult to rationalize into words. A fellow foiler nailed it:"GP, you looked like you were in peace".

He was right. The intense focus and attention to what's happening required to do those lines (at least with my skills), implied an absolute lack of distracting thoughts. Just the sensation on gliding over an incredibly beautiful expression of nature and being part of it. Foiling can be amazing. 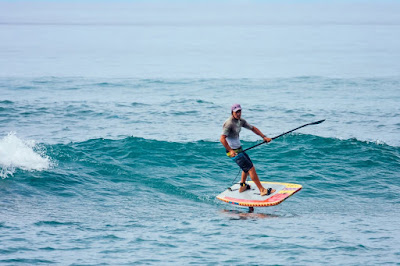 Surfline has two overlapping SSW swells of 16 and 14 seconds respectively for today. Only the W buoy feels two different swell, my guess is that the periods are so similar at the other buoys that they put the two energies together. Doesn't particularly matter, those numbers will still provide plenty waves to the south shore today. Mostly likely in the waist high range, but with occasional bigger sets, specially the longer period ones. Lanai's graph below looks pretty steady. 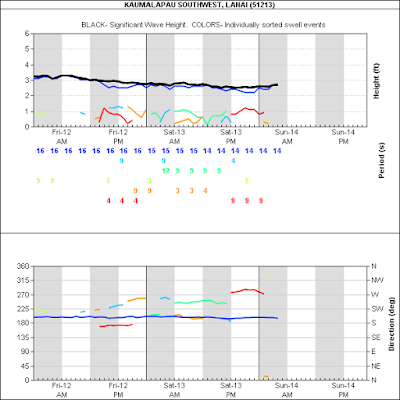 Not much to play with on the north shore and with a down trend (Pauwela graph below), but the early morning should see some calm wind before the onshores will pick up around 10am. 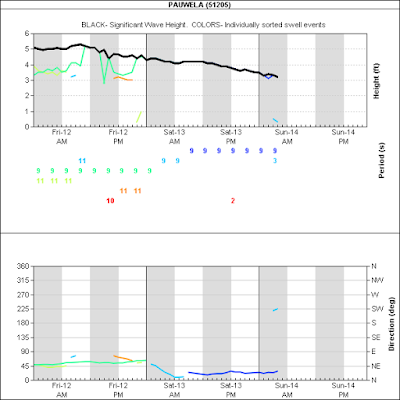 North Pacific has the strong NW fetch that's creating Wednesday big swell. Notice on the great circle ray map on the map that the fetch is between 320 and 330. Somehow, the WW3 model and its Surfline interpretation give us a predicted direction of 332, probably because they think the most energy will be associated with it. Remembering that Honolua has a shadow line of 335, this swell is for sure going to be big enough to wrap around Molokai and hit it, but it's going to be too west to be consistent. An ideal swell for the Bay would have a fetch that sits between 330 and 350. That's why observing the fetches is a key part of knowledge, imo. A part that most forecast sites don't give you.

Check this other example in the South Pacific. An exceptionally long fetch has setup for our delight. On the map on the right I put an arrow to show that it covers a distance that is grossly about 4 days of travel. That means this swell is going to last a long time, starting Saturday 10/20. 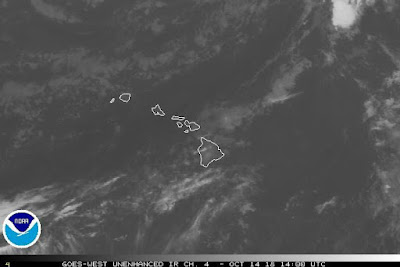