Jason Hall was able to capture the very first long small left at the harbor that I (and most likely anybody) ever windfoiled on. Not sure what you guys will think of it, but it was so much fun that after work I went straight back there and had caught a bunch more. Just like surfing, you can't compare it with regular windsurfing on waves. No hitting lips, no tight bottom turns, it doesn't look as radical at all. That's because it isn't. But it's a lot of fun, because it's a completely different feeling and way to read the wave. Slopy steepness has never been this fun.


The Gofoil Maliko is my favorite foil between the two that I own (the other being the Kai). The new Iwa has the same surface but is more curved, so it's supposed to turn better. I haven't tried one, but if it turns better, I expect it to be less stable. Can't win something in a category and not lose something else in another.
Hopefully I'll get to try one soon, but in the meantime I have no intentions of selling my Maliko and I have a feeling that I never will (perfect foil for teaching). We have some leftover Malikos at the shop at reduced price.

Here's another video that Jason put together to document the session. See how quickly I get it up on the foil as soon as I get hit by the first little gust? No way I could have done that with a "proper" high speed windsurfing foil and/or with a board with the tuttle box in the WRONG position all the way at the back of the board. In my opinion, the windsurfing industry is missing out on an opportunity to boost the sport because of how lazily they grandfathered the tuttle box position and because of the high speed design of the foils. I've tried those setups and they are borderline boring for me, compared to my setup with the slow speed surfing foil and the box more forward. Hopefully they'll figure it out at one point. Or maybe I'm just weird, but I sure am glad to be doing what I'm doing.

A new long period southerly energy is recorded by a couple of outer buoys. Pat Caldwell called it perfectly, while Surfline undercalled it at 1 foot only. I'm off today, so expect multiple beach reports, eventually also from the south shore.

More NE energy on tap for today, mostly in the 9-10s range. Hookipa looked pretty bad at sunset yesterday, even though I'm sure there were diamonds in the rough. I'm gonna look again at sheltered spots.

Wind map not working again, here's the two models at the bottom of the Windguru page showing trades for the day before a no wind day tomorrow. 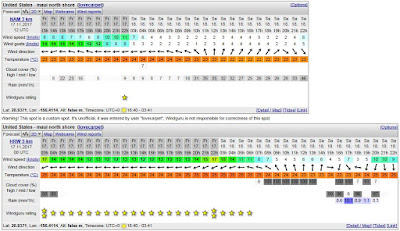 Strong N fetch in the North Pacific, related swell forecasted to peak at 10f 14s from 347 at 2pm Sunday. Vicinity will give this swell strong consistency with a lot of water moving.

No fetches of relevance in the South Pacific. 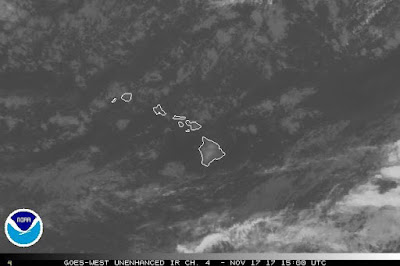 What up GP,
How much are the Gofoils you have at HiTech? Would I be able to use it with the stick on mount. I have a old race board would be good except the tuttle box would be too far back according to your r&d
Aloha, Westside Dave

Yo Dave,
The Maliko is now tagged $1450, but come and see me and I will do something better.
With the stick on mount ($160), you would need also a tuttle box adapter which costs $200. Probably better to have Dave Peterson install a tuttle box in the proper position. I would put it on a sup board and install a mast track in it, so that you can do both. But learn how to windfoil first!!
Cheers brah.