All work no play for me yesterday (good day for that), I'll make sure I'll catch up today.


Si Crowther has been shooting the warm ups at Honolua, this is Carissa Moore last Friday in a shot from this gallery. 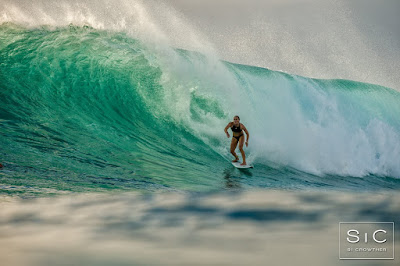 2am significant buoy readings
South shore
No indications of southerly energy at the buoys, the Surfline forecast calls for 1.5f 14s, so there might be small waves probably in the knee high range. There was some wrap yesterday in the Lahaina-Puamana area and there might be some today too.

4.3ft @ 14s
3.2ft @ 12s from 3° (N)
3.1ft @ 4s from 60° (ENE)
At 2am the NW001 buoys shows the new NW swell predicted to pick up tonight  as 1.9ft @ 18s from 343°. At 18s it takes 14 hours for the swell to get here (GP's rule of thumb: 16h @16s +-1h -+1s) and that is in line with the Surfline forecast reported below (yellow line). As you can see, the swell will peak tomorrow and there's an even bigger one (blue line) predicted to pick up Thursday and last all Friday. I believe the WSL ladies only need three days to complete the contest, my guess is that they're going to wait until tomorrow and run it three days in a row. It's also possible that they're going to go on hold today to check how the swell will pick up in the afternoon, but that's a slim chance. Despite the fact that there will be waves from the existing northerly energy already in the early morning, I don't think they'll start this morning, since it's also high tide. We'll see. 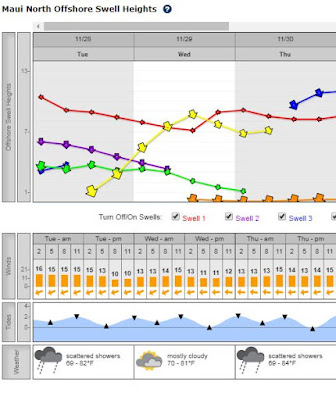 Once again, this is another example of how important the indication of the energy of each single swell on the Surfline buoys page (link n.11) is. Below is what you get if you check the NOAA page for the NW001 buoy instead: only 8s windswell and/or 10s NNE swell. Very far from reality and extremely deceiving. 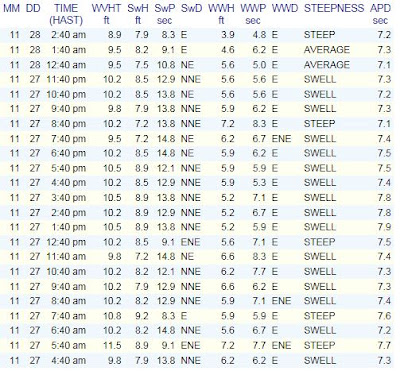 As far as the existing northerly energy goes, Waimea and Mokapu show around 4f 14-15s, but Maui could actually have even more than that, since the Big Island Hilo buoy shows a healthy 8.8ft @ 14s from 1° (N). 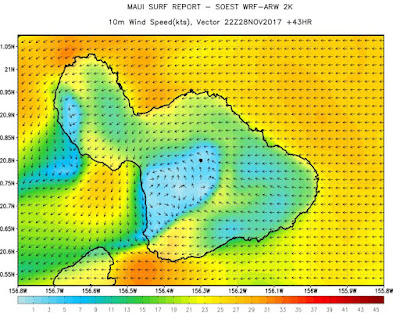 North Pacific shows a strong NW fetch and a windswell one. 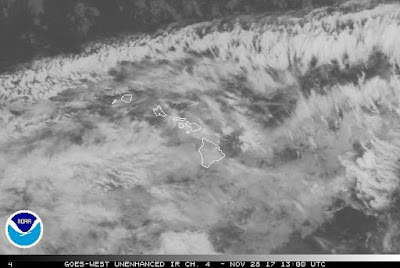