Fun SUP foiling in the morning and not so fun windsurfing in the afternoon, must be a sign of the times that are a changing. Here's some shots from Tomoko that captured the beauty of foiling. Windsurfing felt draggy and bumpy in comparison. 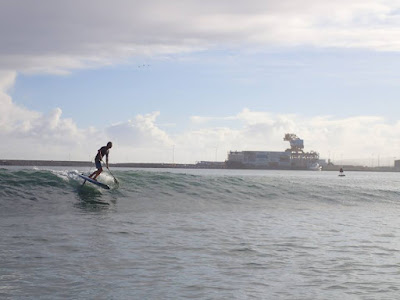 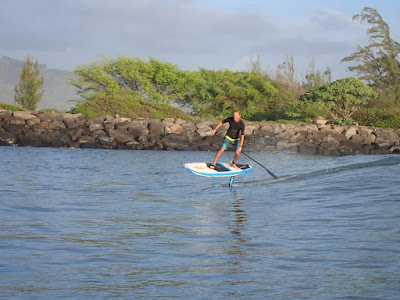 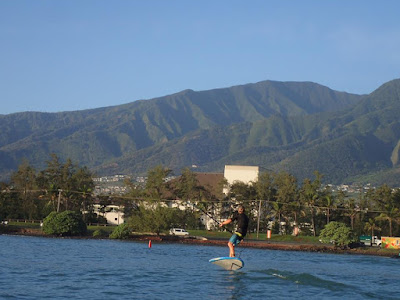 Tomoko takes her shots with a waterproof camera that she keeps in a funny pack. Like a far west gunman, she's extremely quick at pulling it out on her paddle back out to shoot someone riding. Thanks a lot, I took this one from the jetty instead. She's totally laughing. 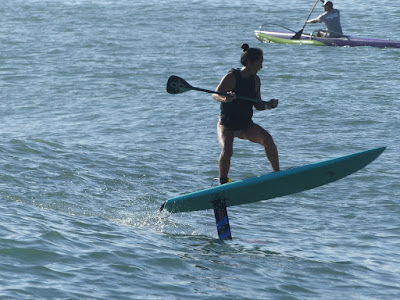 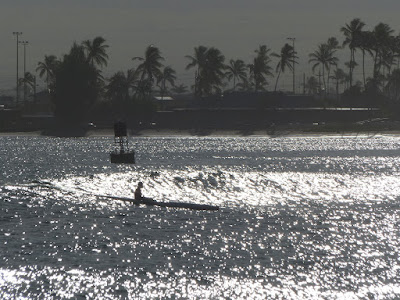 4am significant buoy readings
South shore
No indication of southerly swell at the outer buoys, but there should be some new long period energy. In fact, below is the collage of the maps of Nov 1,2 and 3 that show a strong fetch oriented towards the Americas of which we should get some inconsistent angular spreading.

Pat Caldwell seems to agree with my analysis: Starting 11/1, a low pressure deepened and broaden at the eastern edge of the Hawaii swell window as it tracked ENE. It aimed high swell to 30 feet at targets SE of Hawaii 11/2-4. Angular spreading could bring in inconsistent, long- period forerunners from 160-175 degrees late Tuesday. It should be filled in on Wednesday at levels near the summer average for SSE exposures. It should slowly decline Thursday into Friday.

And Surfline (or the WW3 model) too: this is the forecast for the next three days and the red line is the swell we're talking about. Please set your expectations low, as the angular spreading is something really difficult to predict and it will be inconsistent by definition.
I worked the last 30 days in a row (only half day though) and today I finally have a full day off, so I might go check it out at one point. Stay tuned for multiple beach reports throughout the day. 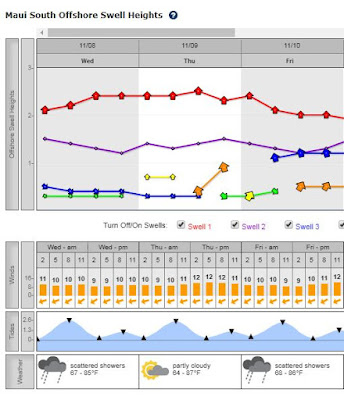 Still some NNE energy at the buoys, but on the declining side, as the red line in the Surfline forecast below shows. The yellow line instead shows the onset of the much bigger NNE swell generated by the fetch we observed yesterday and the day before. 6f 15s from 16 degrees at 8am on Friday is pretty much as good as it gets for the rights at Hookipa.

The Aloha Classic took a day off yesterday. They only need to complete the Mens and Womens pro brackets (they can do it in one day) and I suggested the head judge to wait for Friday's swell for that.
But windsurfing also needs wind and the direction that Windguru suggests mid day Friday is not exactly ideal in the mid 60s. Wind direction looks better Thursday and Saturday, and the cloud cover is definitely better on Thursday. Tomorrow morning I'll try to help with a prediction of when the swell will pick up based on the readings at the N buoy. 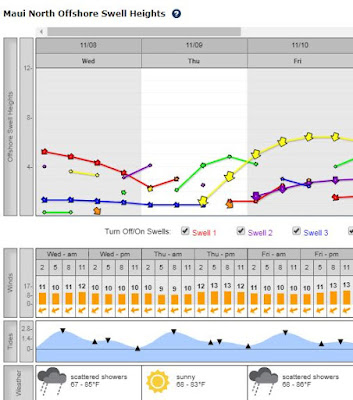 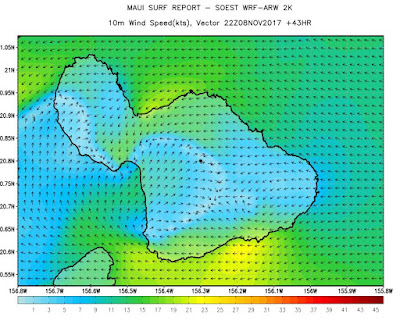 North Pacific shows only a small NNE fetch of winds oriented towards us.

South Pacific only shows a very distant fetch SE of Australia. I don't think we're gonna get much out of it. 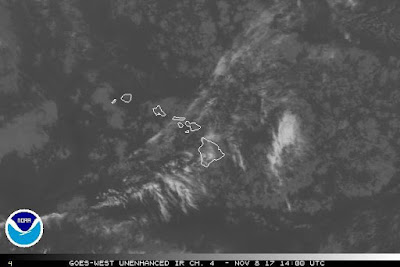