Two longboard sessions in Lahaina for me was the fat bounty of yesterday's hunt. The waves were awesome. But today I see some foiling conditions on the north shore, so here's the most inspiring foiling video I've found so far: the legendary Laird Hamilton at Chicama.

I've surfed there and yes it's long but pretty soft wave and you need a very big swell to connect the sections on a regular surfboard. It looks perfection for foiling instead, I might have to go back. And I thought I was done with cold water and travelling with gear...


To reinforce the concept that foilers need and enjoy less steepness than regular surfers, here's a photo of a wave I lately had the pleasure to share with Kelly Slater. 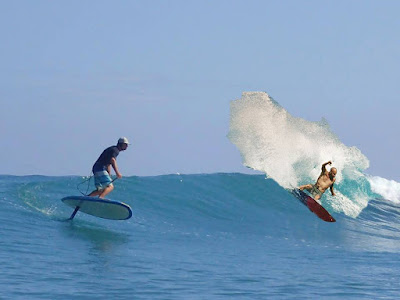 Two periods of southerly energy at the buoys. Yesterday in Lahaina the waves were waist to chest high with occasional shoulder high sets (low consistency, of course). Sorry if I didn't post a beach report, I was too busy/jonesing to get in the water. Should be a bit smaller today, but still some waves. Back to Pat Caldwell's comment I posted yesterday, I would say that the WW3 model wasn't wrong with the size of this angular spreading swell, it was only one day too early. The more I observe angular spreadings, the more I appreciate how remarkable they are. As long as the swell is big and long period enough, the waves can bend easily 90 degrees from the original direction. I didn't read that anywhere, I empirically noticed that.

Mokapu
5.5ft @ 15s from 14° (NNE)
New NNE swell is up and rising exactly as predicted. Below are the graphs of the N and Mokapu buoys together with the Surfline forecast. I put an arrow on the first graph to show where the swell got up to 6 feet. The arrow on the Mokapu graph shows the equivalent point (only 5 feet, most likely because of the dispersion due to the extra travel). Based on what the swell did at the N buoy after that, I drew a dotted line on Mokapu to show what it should do locally today. And that is exactly what indicated by the Surfline graph.

The offshore swell Surfline forecast is the most accurate I found. Many other websites can be accurate (in the end, they all use the WW3 model), but the Surfline one uses a graphical representation of what the buoy graph will show. If you think that Surfline is not accurate, it's because you're looking at the specific spots forecast, in which they try to guess the size of the breaking waves. And yes, just like any other website, they're pretty bad at that.

Throw that app away and bookmark links n.14 and 15 is my recommendation. You need to learn what each swell (size, period and direction) does at each single spot and then you'll be able to do your own spot related forecast based on the offshore swell forecast. It takes time, but it's the only way, IMO.

With this direction, the arrival time at Mokapu and in Maui is pretty much the same, as the image below shows. The yellow line is oriented at 105 degrees, so it's perpendicular to the 15 degrees direction of this swell (red line). I can give you maybe half or an hour difference, but that's it.
That means plenty big waves on the north shore today and the wind is calm in the early morning. The Point at Hookipa might offers some 10's, unfortunately I have another busy day and want to be somewhere else at dawn, so no beach report. I would appreciate photo contributions by readers for tomorrow's call.

Wind map at noon shows light trades. The Pros at the Aloha Classic should be able to handle the challenging combination of big waves and light wind. It's gonna be a great show, I think. 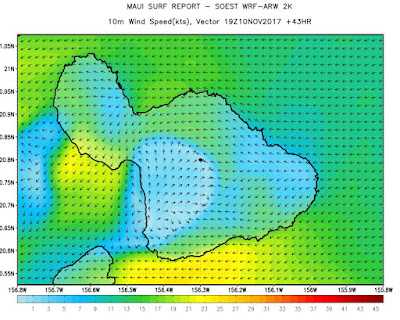 No fetches deserving being circled in the South Pacific today. 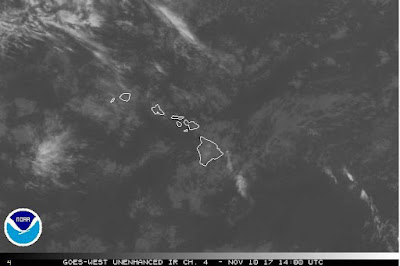