A surf and a windsurf session for me yesterday. The wave sailing conditions on the west side were far from epic because the wind was way too strong for my taste (and skill).

Here's coworker Russ Faurot throwing an aerial on a closeout section. See all the wobbly peaks on the wave on the front? They're caused by the local windswell which is caused by the strong wind. 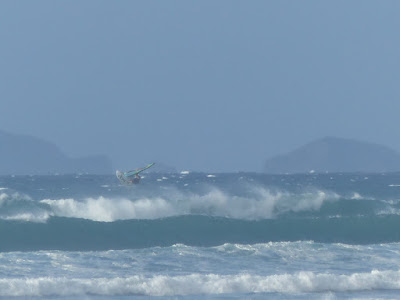 Below is a video from a couple of years ago that shows how the texture of an epic wave there looks like.


This instead is a long (8 minutes) video of a couple of really good days back in 2010. Check the period of that set after the chat with Levi.


This is how the wrap looked in the Puamana area, which was protected by the wind. Check how strong the wind looks on the outside. 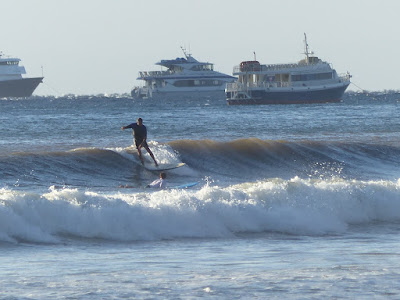 4am significant buoy readings.
South shore
No indication of southerly energy at the buoys, the Surfline forecast calls for 1.2f 12s and that's tiny. In Lahaina, it should still be about the wrap today.

6.2ft @ 14s from 10° (N)
I don't know how to explain the 2.5f of difference between Waimea and Mokapu, I think Pauwela would show similar numbers to Waimea. So, still pretty solid energy from the N on tap today. Strong wind on the north and west shores will make the search for clean waves challenging, but there might be spots that are sheltered. I heard Honolua wasn't that good yesterday, plus the access is difficult as they're building the structures for the upcoming WSL women contest that starts tomorrow. They're gonna have plenty swells to choose from.

Fortunately at Honolua the trades are offshore, because they're going to be pretty strong the next few days. The end of the 10 days Windguru table below looks even worse, with some horribly strong easterly trades in the first days of December. Hopefully I'll have a Maliko 200 foil by then, so I can give the foiling downwinders another try. Or maybe I should say that hopefully I won't have one, since it's going to be very rough out there. 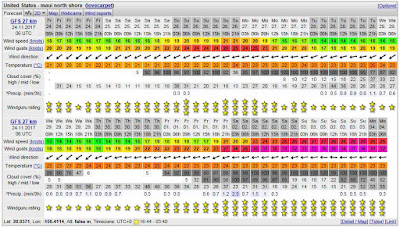 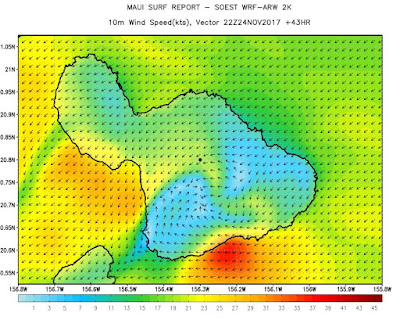 North Pacific continues to show northerly fetches: a close windswell one and a distant strong N one of which we will get some angular spreading. 7f 14s from 357 predicted by Surfline on Monday.

South Pacific doesn't have any fetches of relevance. 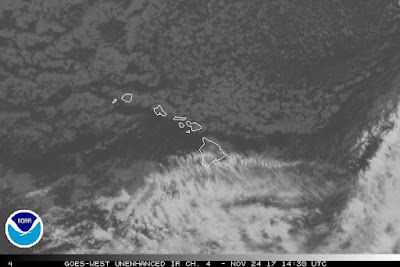