A longboard session in Lahaina for me yesterday. This is the only photo of the day I have. 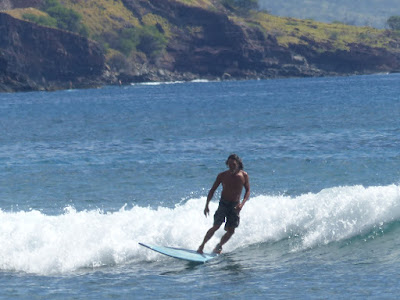 This is the amazing sunset in a photo by Jimmie Hepp. 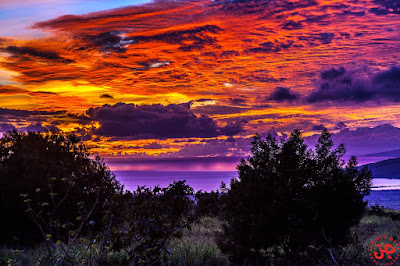 4am significant buoy readings
South shore
No indication of southerly energy at the buoys (probably too much energy from the north), the Surfline forecasts calls for 1.7f 14s from SSW.

Here's how Pat Caldwell described this swell:The combined remote and nearby generated swell should make a less organized breaker pattern Sunday 11/19 under a moderate onshore winds-- adding chop.
In other words: big, but no clean surf today, unless you find a sheltered spot.

This is the wind map at 10am showing the approach of the moderate NW wind. I linked this model in the GP's meteo website list (link n. -4), you have to adjust the "tau" parameter to change the time. Hawaii time is 10h before the Z time indicated on top of the picture. 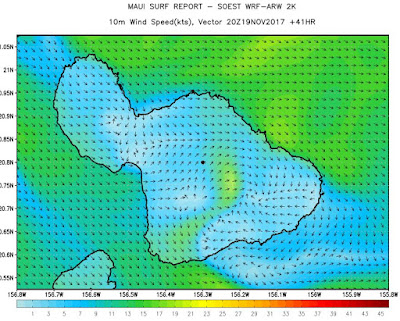 This is the mat at noon HST (22Z) and it shows the moderate NW that will blow for the rest of the day. Catch it early, because it's gonna be pretty bad later on. Unfortunately iwindsurf.com already shows 13mph from NW at 6am in Kahului. 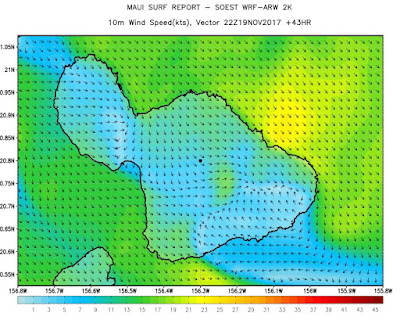 North Pacific shows a northerly fetch very close to us.

South Pacific shows a strong fetch oriented towards the Americas of which we should get some angular spreading in a week. 1f 16 on Sunday and 1.5f 15s predicted by Surfline on Sunday and Monday respectively.

Morning sky shows a big band of clouds SE of us. The red arrow indicates the way the air is moving in from the north, so it's gonna get a bit colder. 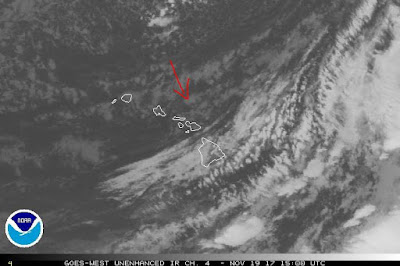