Yesterday I SUP foiled in the neighborhood in the morning, then went to work and then windfoiled in the afternoon.

The wind was perfect  and there were at least 8 windfoilers down at lower Kanaha. I can claim that, for very different reasons, the ones in this photo by Dede were there because of my influence. From the left:
1) Zane Schweitzer needed some help in figuring out foil box and mast track position for a board he's shaping for himself and asked me if he could join me in a session. I have two boards with the foil box in two different positions, so I said:"sure, come on over, you'll learn a lot about that!"
2) that's me
3) Dan Taylor took a windfoiling lesson with me and, despite the challenging conditions (wind got too strong at the end), that was enough to get him hooked. He came to Hi-Tech after the lesson and bought himself a Starboard 7.4 foil ready Hypernut. The board doesn't have a mast track (what the hell are they thinking at Starboard?!?), but fortunately the position of the front foot strap inserts allows for a Chinook mast base with the plate to be screwed in a perfect position, so it can be sailed. I tried the board and it's excellent. Better than mine (an older 7.4 POD) because much lighter.
4) Dave Ezzy was watching me windfoiling one day and while following me on his regular windsurfer, he yelled:"Giampaolo, can I try?". Well, of course! And he got hooked too. He would be foiling anyway (he had ordered a Starboard foil already), but that was his first windfoiling experience. Since then, windfoiling is in his heart. 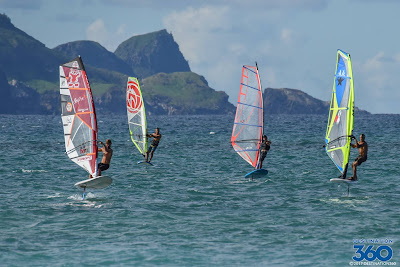 Blog reader Marc left a comment yesterday asking for guidance to buy a foil that could both SUP and windfoil. That's the easiest question ever: get a Gofoil Maliko. Windsurfing foils don't have enough lift to allow foiling at the slow surfing speed. They only foil at higher speed, so if you want to windfoil and go 20 knots of speed, you need one of those, but if you want to SUP foil and windfoil at lower speed, you need a Gofoil. There's new models coming out that I haven't tried yet, but as far as the current models go, also Zane loved the extreme slow foiling capabilities of the Maliko. Here's Zane (this time on the Kai) in a jibe attempt (he closed several ones) that shows his skateboarding background. He's overfoiling (when the foil comes too high and breaks the surface of the water losing its lift instantly), but he's still in such control that manages to switch his feet. 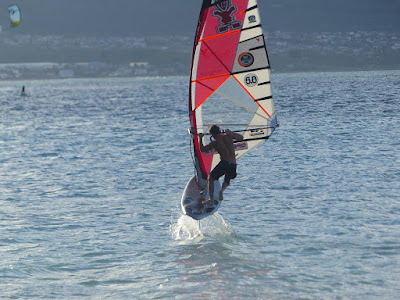 The board is now coming back down to the water, but no big deal for brother Zane... he's on it and not going to fall. 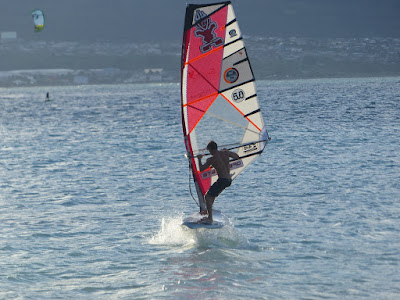 That could be the indication of a new low long period pulse. Below are the maps of Nov 6 and 7 that show a solid fetch in the Tasman Sea. The swell is not even on the Surfline forecast, but Pat Caldwell agrees with me:
The mid latitude longitudes from south of Australia to SE of New Zealand had an active austral Spring cyclonic mode starting 11/4. A series of lows in the Southern Ocean from SW to SE of Tasmania should keep active surf this week, with long-period forerunners filling in Tuesday and holding through the week with back to back separate events both of which should be less than 2 feet deep water swell.

So, there should be INCONSISTENT long period waves on the Lahaina side. I love it over there and will post a beach report at some point in the morning. 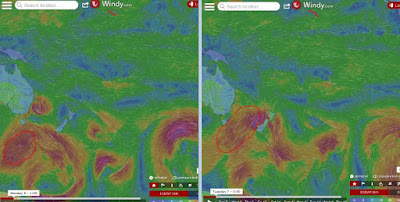 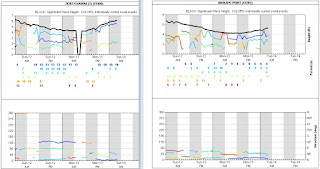 Pat Caldwell says: The low in the Gulf of Alaska 11/11-12 was not as strong with lower-end gales, compared to the system that made the above average NNE event that peaked locally 10/10. The new event should fill in Tuesday 11/14 from 010-030 degrees. It should hold at levels above the east side but below the north side average into Thursday from the same direction as a new event fills in.
Below are the maps of Nov 11 and 12 and show the fetches he's talking about. 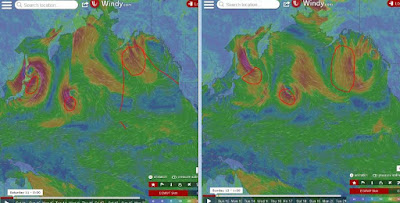 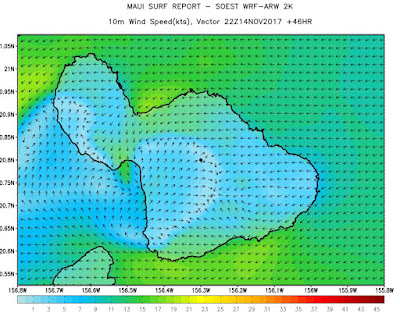 North Pacific shows a small distant NW fetch and two NNE fetches, one associated with a local low while the other one is a small portion of a bigger/stronger fetch oriented towards the US west coast.

South Pacific shows a large fetch oriented towards the Americas, of which we should get some angular spreading. 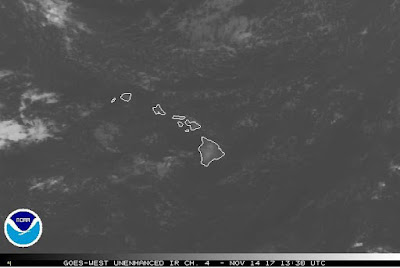 GP,
Following on that question of which foil to buy, Naish has a Hover 120 Crossover board that can presumably used to SUP foil and wind foil with the same foil. Have you tried the Naish foil? Do you know how that would compare to the Maliko? I like the potential of doing both with one foil.
Thanks in advance.

I haven't tried the Naish foil, but when I see them in the lineup, they don't look like they foil as good as the Gofoils. That's just my empirical observation and it could be due to the riders. You put Kai Lenny on it, everything looks good.
One fact is that it's aluminum and way heavier than the Gofoils.