Another fantastic SUP foiling session was enough for me yesterday, even though the afternoon offered epic (for my standards) wave sailing conditions, but Hookipa had the contest happening. They run some Amateur heats and completed the youth division won by Zach Schettewi.
I believe they have a live webcast here.

Photo by Jimmie Hepp from this gallery. 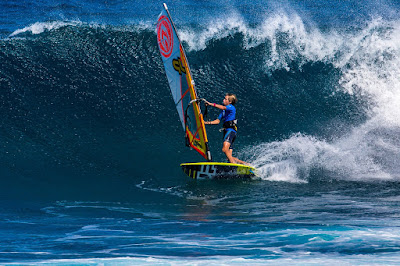 The video of Kai Lenny's gopro clips at the Peahi contest just came out. That's a hell of a thumbnail.

The only southerly energy recorded by the outer buoys is from the southern hemisphere trades and that direction is blocked by the Big Island. Surfline still has 2f 14s in their forecast, and unfortunately I don't have any report from the south shore. I'm gonna guess the usual small, but not flat.

New long period WNW swell on the rise (that fetch off the Kurils we observed a few days ago), but that direction will get shadowed pretty much everywhere by Molokai with the exception of Hookipa. It's a low swell though and Surfline only has 1.6f 16s in the forecast for tomorrow. Today it will be mostly about the declining existing one, which is down to 3.3f 11s at Waimea and will come down in period throughout all day. Still at least head high at Hookipa to start with, stay tuned for a beach report later.

The waves won't be particularly big in the next few days, but the windsurfing contest will have good wind till the end of the waiting period, as shown by the Windguru table below. 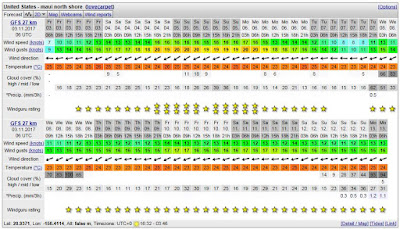 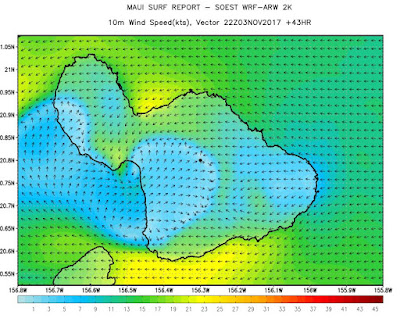 North Pacific shows a NE fetch. Related swell should hit Tuesday. The fetch NW of us is oriented towards the Marshalls and unfortunately won't affect us.

South Pacific has a strong fetch oriented towards central America for the third day in a row. We can only hope in a bit of angular spreading. 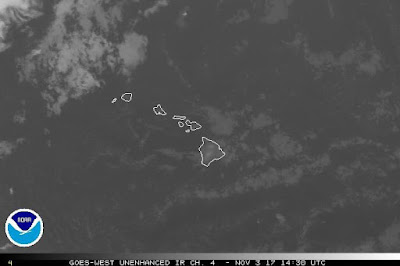