SUP foiling and shortboard sessions for me yesterday and this time the fun factor was the other way around: 1 and 9. So it's not that one is more fun than the other. It all depends on the conditions and the crowd. Finding the right place at the right time (there was nothing good in the early morning) is my favorite game and that's why I have "surf guide" written on my business card.

In between sessions I took some photos at the harbor jetty where the HSA contest was being held. This keiki was catching the white water on the inside and gets a 10 for the cuteness. 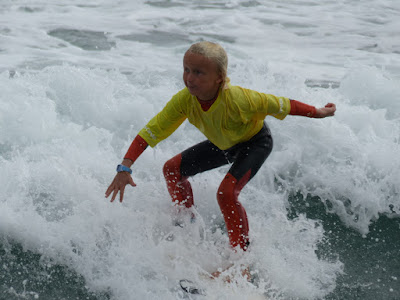 The photos below show the show that Jackson Bunch put up in his heats. This is 10.40am and that's when the waves started pumping and were still a manageable size. 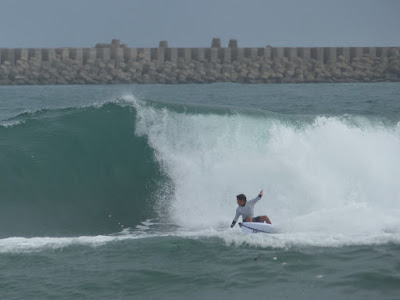 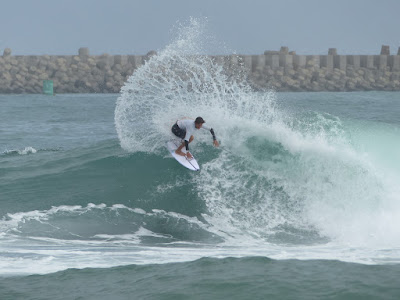 The back half of his board is completely out the back of the wave. He stuck the turn and continued with perfect flow. 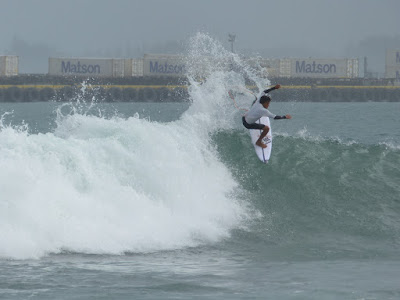 The term "air drop" gets overused a lot (specially by the WSL commentators), but this is a real one. 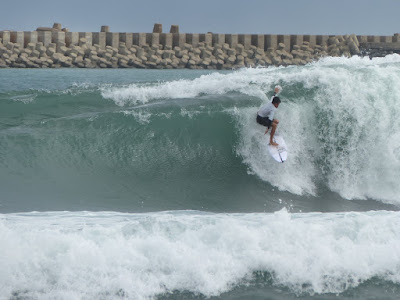 As soon as he connected with the water at the bottom, he seamlessly engaged the rail and his eyes were already on the spot for the next maneuver. Impressive display of surfing from this young and very promising man. 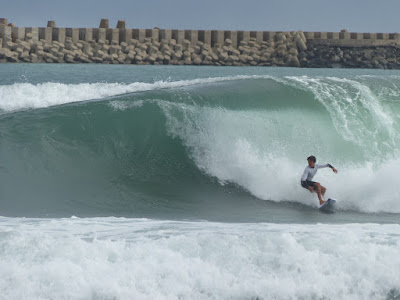 4am significant buoy readings
South shore
No energy at the buoys, the Surfline forecast calls for 1.2f 11s plus 0.6f 14s at 8am. Very small stuff, probably flat to knee high.

8.2ft @ 14s from 332° (NNW)
4.8ft @ 9s from 350° (N)
Consistent sizes at all the reported buoys, but notice how the period went down to 11s already at the NW buoy. That's because it's well offshore and gets hit by the swell earlier. The same gradual decrease in period will happen throughout the day locally. Below is the graph of Pauwela next to Surfline forecast for yesterday and today. Notice how the two graphs are similar (the main difference is an earlier than predicted peak). I put two arrows to indicate how the offshore size went up from 6 to 12 f in 6 hours. A foot and hour is a steep rise and that was clearly visible in the water. By 2pm, it got too big for even the jetty inside the harbor, which was tripling up in a pretty horrible washed out way. Very hard for the young kids in the water to find a good wave.
Every time I get to this point when writing the call, I feel like I said enough, but for some readers maybe I didn't, so today I'll do an extra effort. To recap: 8.2 f 14s is the reading at Pauwela at 4am, that's our starting point. Then the combination of the reading at the NW buoys and the Surfline forecast (which can be accessed by anyone at link n.15), tells us what's gonna happen during the day. In this case, slowly declining size and period (hence size of the breaking waves). How big it's gonna be at all the different spots, it's a guess that each single reader should make an effort to do. It might take a little time, but after you observe buoy readings and the size at your spot(s) a few times, you'll know enough. 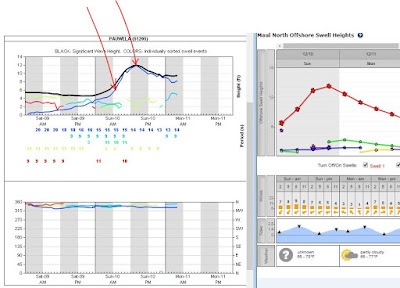 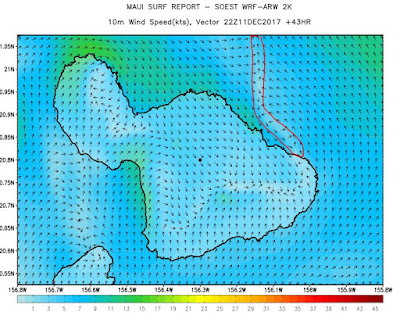 North Pacific shows the strong fetch we saw yesterday still stirring waters towards us and getting closer. A fetch that follows the swell it's generating and keeps building the same waves is called captured and usually is associated with the biggest swells. 18f 16s from 324 is the Surfline prediction for Wednesday at 2pm. Note that this swell is the biggest of the last three, but it's also the more west. Good for the Pipe contest, but way too big on Wednesday and with questionable winds. The best day should be Friday, imo.

South Pacific shows a fetch SW of New Zealand, which will provide some blockage, but we should receive a little bit of energy next week. 1f 16s called by Surfline for Tuesday Dec 17. 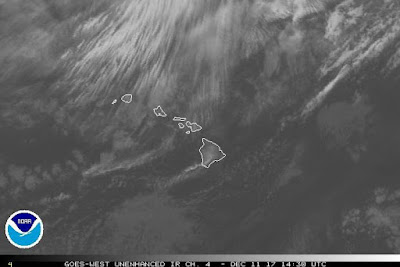 That Jackson kid was killing it. Can't believe how much strength he had in some of those carves.