Double SUP foiling sessions for me yesterday, both very fun. Here's a few images from the harbor. 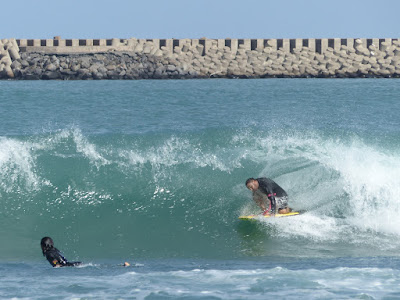 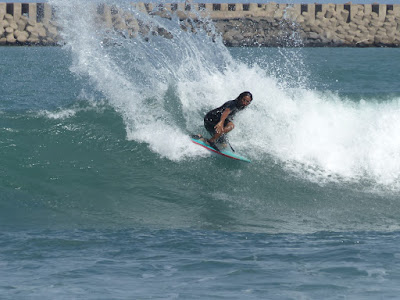 Soon to be father north shore shaper Keith Taboul is having fun with foiling. Notice how he's focused on the water right in front of him. That's not to spot eventual bumps (which the foil doesn't really feel), but to assess how high he is above the water. He's flying pretty high in this moment, so he's shifting most of his weight on the front foot to keep the nose of the board from going even higher and result in a overfoiling crash. 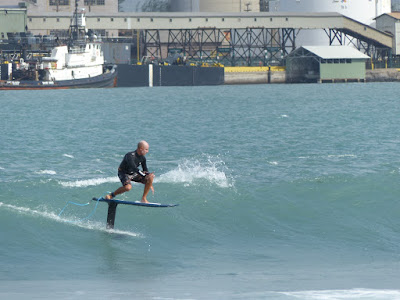 At the start of this carve, he's much lower and that's how you need to be to start a turn, as the foil will accelerate at the end of it. 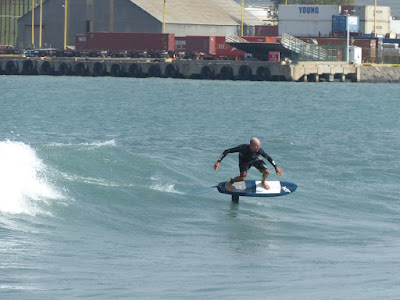 My friend Marco took this photo at Honolua. You can see the northerly wind affecting the lip line a bit, but I also saw some amazing barrels in some other photos, one which from Dusty Paine, who evidently chose to fly back home for this day that was way too big and stomry for Pipeline. Good call and good luck to him in round 2 against Medina. 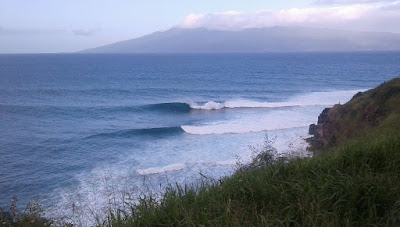 This photo by Jason Hall shows how not to strap your boards on the car. I hope the car rental company charged him something for the wax removal from the rooftop. 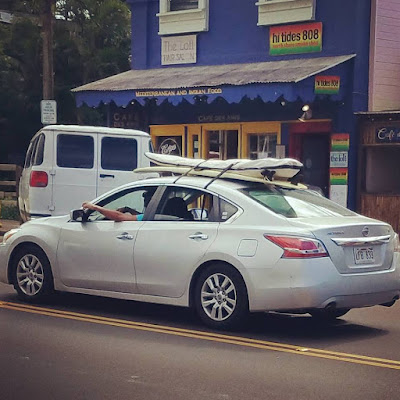 4.7ft @ 13s from 321° (NW)
3.4ft @ 9s from 331° (NNW)
3.1ft @ 10s from 327° (NW)
The swell arrived, but it wasn't as big as predicted (at least in Maui). The NW buoys went up to 20f 17s at one point yesterday (which is massive), but the Pauwela buoy (graph on the left below) "only" reached 15f 15s, which is a good 3 feet below the Surfline forecast (graph on the right). Also the outline of the graph is not particularly precise. The swell should be trending down throughout the day, but when the starting point is 11f 15s, it means that the whole north shore will still too big and searching for a sheltered spot is again the call. The wind will be much worse than yesterday too (28mph from NNE in Kahului at 6am), so not a great day for surfing I'm afraid. 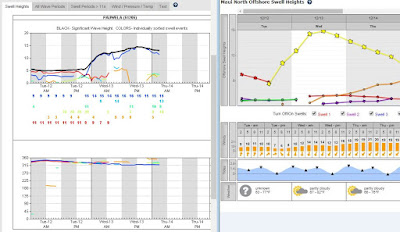 Wind map at noon shows moderate NE winds. The red circle shows the area where you want to assess the offshore wind direction. In this case, it's well more north than the regular ENE trades, so it won't get amplified by the Haleakala much on the north shore. It will in Kihei and the same thing will happen on the west side because of the West Maui Mountains. 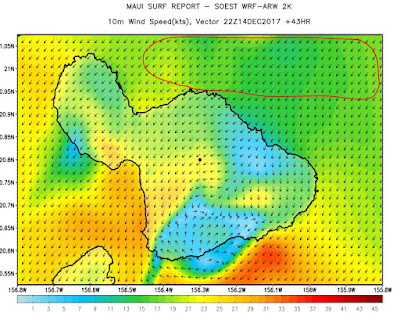 North Pacific shows a wide area with weak WNW fetches and a small NE windswell one.

South Pacific shows a small southerly fetch. Only 0.8f 14s predicted by Surfline out of that in a week.

Morning sky. Thanks to our 21 degrees lovely latitude, we've been completely spared by the rain of that massive front. 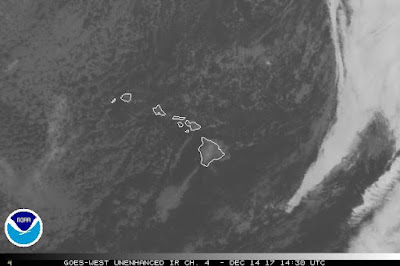 What's interesting about the surfline buoy readings vs the forecast is the readings show multiple swells from approximately the same direction and nearly the same period. Each individual swell is lower than the forecast, however the forecast only showed one primary swell. If you combine these readings you would get about what was forecast as a single swell. The descrepency may be due to surfline forecast not breaking the main swell into these very close but seperate components. In the water I'm guessing the reality is occasional very large sets as these nearly same swell direction and period must interact and combine. To back that up, from my house I have a clear view of outer uppers to Baldwin reef and late yesterday it looked huge out there. Pier one OTH looked big but not giant so I'm assuming some blockage due to the west component of these swells. Below is the pauwela buoy data this morning to illustrate what I'm talking about.

Yep, this swell was more west than the previous two or three, so some energy got blocked. But the Surfline forecast for Maui usually takes that into consideration. Cheers.