Double SUP foiling sessions for me yesterday, but that's because I had some gear to test. The waves were good enough for regular surfing in fact, and that would have been my choice if it wasn't for the test. But testing new gear is fun, there's always something to learn. The main thing I learned yesterday, is that heavy foils aren't as good as light foils, unless you're going really fast (in which case, they might add control). They also keep momentum when a wipeout occurs and that's dangerous.

The harbor was flooded with action yesterday. The photo below shows Dave Kalama surrounded by a bunch of fellow foilers, but there were many other legends (Robby Naish nose riding his regular SUP and Pete Cabrinha foiling on his shortboard, for example) and all the elite foil shapers of the islands testing gear. It was exciting just to join the parking lot technical conversations. 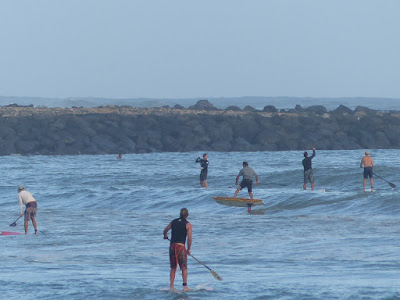 5am significant buoy readings
South shore
No indication of southerly energy at the buoys, the Surfline forecast calls for 1.5f 15s.

Solid numbers at the buoys. The mix of different period energy should hold pretty steady today, then declining tomorrow and Saturday, before a new similar swell hits Sunday. Look for sheltered spots on the north shore, while the upper west side should be good also today.

Wind map at noon shows very light sea breezes and that should be the case all day. Finally. Morning sky looks clear and air is slowly moving in from the north. That's why the temperature in Paia at 5am is 57 degrees (14C), the coldest so far this winter. 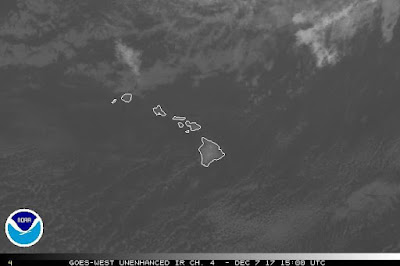