A shortboard and a longboard session for me yesterday. There were some diamonds in the rough at Honolua, but I couldn't find any (there was always someone on them). I found many at the longboard spot instead, since I was alone. As soon as this grom paddled out, I knew she was gonna make the blog. 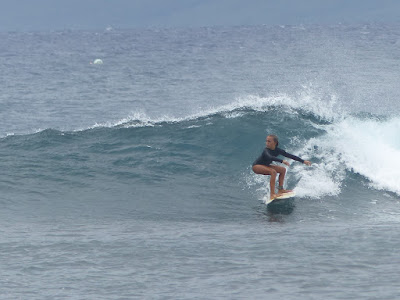 She got the frontside bottom turn down. You're looking at that 1f 10s from the south at a spot that amplifies the size a lot. 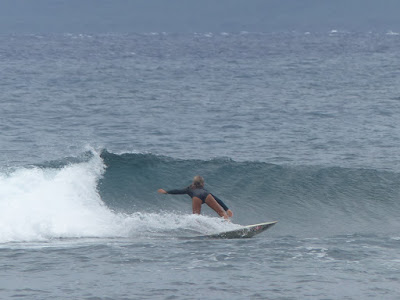 5am significant buoy readings
South shore
No indication of southerly energy at the buoys, but the Surfline forecast calls for 1f 16s and that could be fun if it's really there. It's the start of an angular spreading swell, so expect particularly low consistency.

Mokapu
10.3ft @ 9s from 49° (NE)
Old NNW swell trending down at the Hanalei and Waimea buoys, but there should still be some declining energy throughout the day. A new long period NW swell is predicted to pick up today by Pat Caldwell and those low long period readings at NW001 and Hanalei might be just it, despite the NE direction indication. There were no NE fetches that would justify just long period readings in the past few days, this is another example of how the buoys can be fooled when there's another much higher energy in the water like the strong NE 9s windswell. It's might also be Surfline's fault, we don't really care. I don't think that will be noticeably much in Maui, maybe some forerunners sets at sunset.

As far as Maui's north shore goes, today will be dominated by the 10f  9s from north easterly windswell that will cause (together with the trades) stormy conditions. I'll check Hookipa around 7.30am, stay tuned for a beach report.
Wind map at noon shows light to moderate trades. 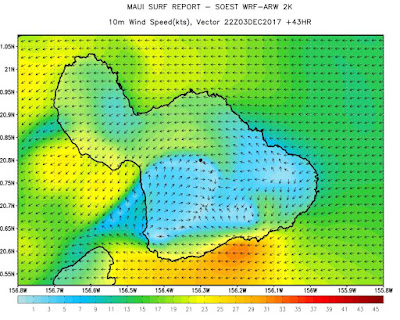 Morning sky shows we're not under those clouds anymore, today it should be less rainy than yesterday. It doesn't take much, I know. 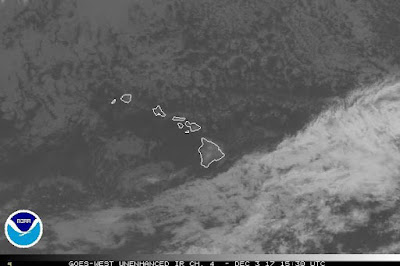