Sup foiling and windfoiling sessions at the harbor for me yesterday.
This photo by Jimmie Hepp from this gallery was taken in a very temporary moment of cleanness at Hookipa. Still, the wave in the back is breaking left in a place where it usually breaks right, because of the windswell induced sub-peak. It's all about finding the diamonds in the rough these days. Things are going to change soon though, since there will finally be some windless days later in this week. 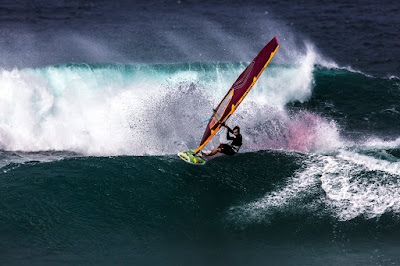 After a long absence of southerly energy at the buoys, this morning the SW one registers something. The Surfline forecast calls for 1.4f 14s instead. There should be some small waves on the south shore.

New NW swell on the rise all day, while the windswell at Mokapu is trending down. Below is the collage of the graph of NW001, Waimea and the Surfline forecast. The NW swell is indicated by the blue color on the first one, light blue on the second and green on the last. The Buoys to Maui travel times and Maui's shadow lines post has all the details, but one easy thing to remember is that at 16 seconds, it takes 4 hours from Waimea to Maui. So just mentally shift that light blue line 4 hours forward, diminish the size a tiny bit and you have what's going on on Maui. Or just look at the Surfline forecast, that lately has been extremely reliable, IMO.

Kind of hard to read today though, since the scale is set as high as 29f! The reason is that later on in the graph (the subscription gives you access to 17 days of predictions), the forecast for December 13th at 8pm reaches the extraordinary level of 29f 18s from 318. That's 9 days ahead, so the forecast is based on what the models think it will happen and that can change (I bet it will go down). But most likely there will be a giant swell those days. I personally have never seen a 29f 18s swell, it would be cool to experience that.

Back to today, slightly better surfing conditions this morning, as the wind is not blowing hard as usual. Only 3mph at Hookipa at 8am, unfortunately the Hi-Tech Christmas party kept me up late, so no action for me this morning, but I'll post a beach report later before going to work.

Wind map at noon shows light NE trades that probably won't be enough for sailing on the north shore. Stronger in north Kihei with this direction. 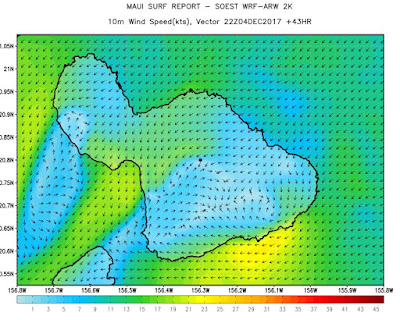 Nothing in the South Pacific. 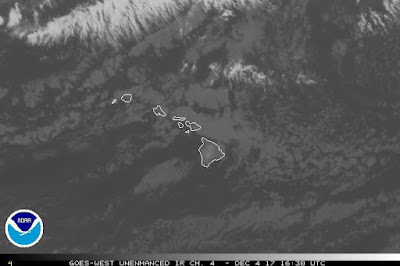