Today is the winter solstice, which means that it's the shortest day of the year.
"Solstice" is derived from the Latin phrase for "sun stands still." That's because—after months of growing shorter and lower since the summer solstice—the sun's arc through the sky appears to stabilize, with the sun seeming to rise and set in the same two places for several days. Then the arc begins growing longer and higher in the sky, reaching its peak at the summer solstice.
The solstices occur twice a year (around December 21 and June 21) because Earth is tilted by an average of 23.5 degrees as it orbits the sun—the same phenomenon that drives the seasons.

Just one shortboard session for me yesterday. I was actually headed to Honolua Bay right after it, but I didn't make it pass the flooded Puunene Avenue. I figured it was a challenging day to be driving around.

This might not be the most glamorous surfing photo I've ever taken, but it is from yesterday and it expresses well the kind of day that it was. 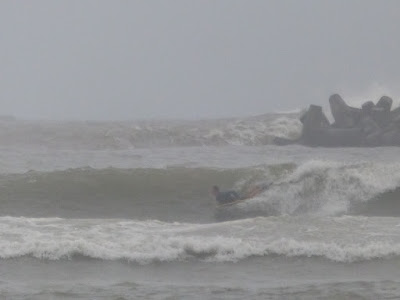 So I stayed home most of the day (made some slides for the meteo workshop!), but at one point in the afternoon I read the Pauwela buoy reading and loudly exclaimed in Napolitan dialect:
"Azz, riec pied triric second... da nord! E i stong a cas?!? Nun esist propr!! Almen agg i a bere'!"
Which translates like:"Damn, 10 feet 13 seconds... from the North! And I'm staying at home?!? Not a chance!! At least I got to go see!" 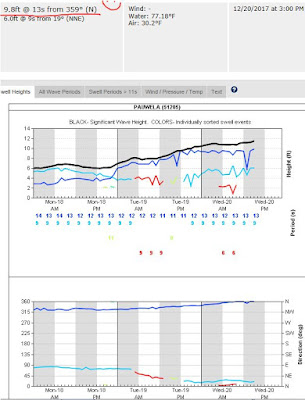 That's all I did, as the rain was still coming down pretty hard. But I observed those 10f 13s at the spot of my interest (that's how you build your local knowledge). I also verified that the wind model I use (on the left) was correct in predicting a decrease in the wind around 5pm, while the one on the right was calling for an increase. You can find both in the GP's meteo websites list (numbers -4 and -2).

3am significant buoy readings
South shore
No southerly energy at the buoys, the Surfline forecast calls for 1.3f 14s.

Still plenty energy from the north on tap for the day and still plenty wind on it to ruin it unfortunately. 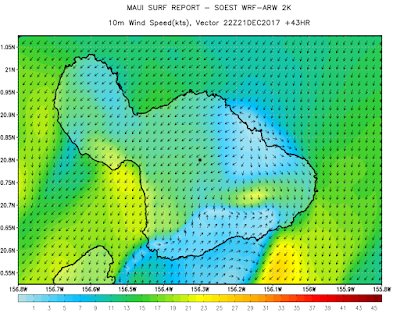 North Pacific shows three fetches:
- a strong NW (related swell predicted by Surfline to peak at 9.6f 15s from 335 on Sunday)
- a small N one moving away from us (that's the one that made the current energy)
- a weak easterly windswell one

We're almost out of the front that brought so much rain. 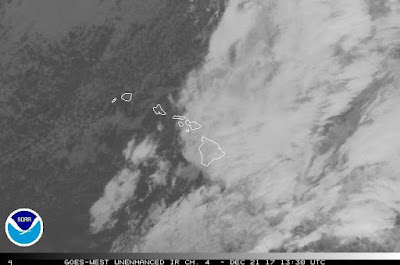 I copied the Kanaha readings from yesterday, and according to these the wind **did** pick up from the north after five. Check it out

I get these from the iwindsurf wap (old phone) site, which I prefer for pure wind readings http://wap.iwindsurf.com/my.iws?o=&t=7994&d=y
Using the above readings as a test case, the soest ARW prediction for yesterday looks right on. Cheers, Ben