Shortboard and longboard sessions for me yesterday. I don't have a photo of the day, but I'll use this  WSL/Poullenot one from this page to congratulate John John Florence for winning the second world title in a row. The Pipe contest was extremely entertaining despite the fact that the waves were not pumping. They will be today, and that might generate some criticism for the decision of running/finishing yesterday. A missed opportunity to finish with a big bang.
--- 7am update: doh, I forgot about the wind, they obviously did a good call. GP, shut up next time! --- 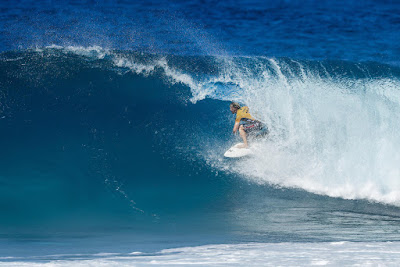 4am significant buoy readings
South shore
No southerly energy at the buoys, the Surfline forecast calls for a new long period low pulse in the range of 0.7-0.9f 16s.

4ft @ 9s from 73° (ENE)
Those very interesting numbers at the buoys require some elaboration. We'll first start from Pat Caldwell's view (the timing is for Oahu).
Gales hugging the Aleutians east of the Date Line 12/15-16 aimed highest at targets NE of Hawaii. Angular spreading is directing some swell towards Hawaii.
This energy got a boost from near to low-end gales that set up in a NE to SW orientation to the immediate NNW to N of Hawaii 12/17-18. This pattern was aiming highest seas NW of Hawaii during the onset 12/17. NOAA NW buoys shot up fast in the morning 12/18 from within NNW to NNE. This shorter period swell should build locally in the wee hours Tuesday from 340-010 degrees. Heights should climb above the Fall average by dawn 12/19.

Below are the maps of Dec 15 (left) and 16 that show the fetches he's talking about at the beginning. 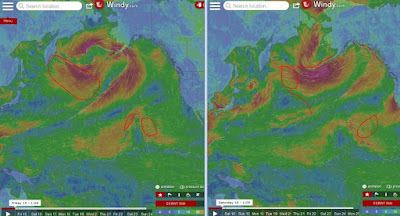 Below is the collage of the three reported buoys. On the post Buoys to Maui travel times and Maui's shadow lines you'll learn that the travel time from the Waimea buoy to Maui at 13s of period is 5 hours and so I drew a red dotted line to show how the swell should pick up in the wee hours in Maui: quite sharply like it did in Oahu during the night. That's a much sharper rise than predicted by the Surfline version of the WW3 model.

I also circled and indicated with two arrows the change of the direction at the NW101 buoy (bottom left). The swell will start from a NW direction and then become more and more north before going towards the NNE.

Lastly, notice that the easterly energy which provided some great waves in the last couple of days is now declining.

Wind map at noon shows very light onshores which will start blowing around 10ish after a start of the day with light offshores. 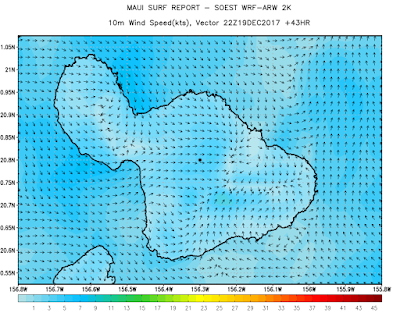 North Pacific shows a distant westerly small fetch and a couple of closeby fetches related to a low that will intensify and move slowly to the north. This is going to be the main source of waves (northerly energy) for the next couple of days, but unfortunately it will also cause some rain and some northerly winds. 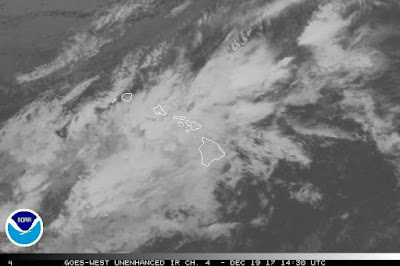 And in fact, it's just down there and moving closer.