Three sessions for me yesterday, it was a wonderful day. It started at Honolua Bay which, even though well below average, still offered some fun rides. 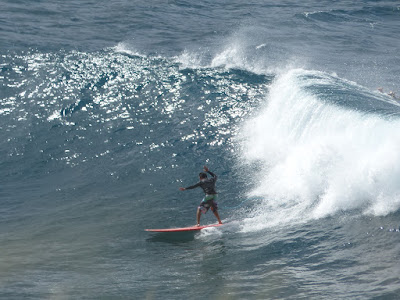 On the way back, Thousand Peaks had barely breaking knee high super glassy waves and I couldn't resist the temptation of a SUP foiling session. After the cold of Honolua (the northerly wind was squeezing in there), it felt really good just to be out in shorts only and feel the heat of the sun on the chest. It was also a great foil pumping practice.

Back on the north shore, I jumped in the water at the harbor for another shortboard session. "Where do you find all that energy?", a friend asked. In the food, obviously. Lately my lunch has been consisting of a smoothy in which I blend something like 15 to 20 different fruits and vegetables. I drink a bit of it and about 40 minutes later I feel a rush of energies.

I do get to dinner time quite hungry though, I admit, and that's how I arrived to the Ding King Christmas party yesterday evening. Despite knowing how unhealthy they were, but for the sake of experimenting with my body and with a gratifying sense of transgression, I munched on all kind of processed food and even drank 3 beers. The result is that this morning I'm so weak I can't even get out of bed. 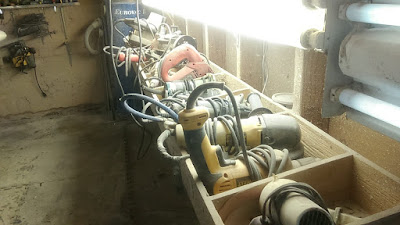 4am significant buoy readings
South shore
No energy at the buoys, the Surfline forecast calls for 0.7f 11s. Mostly flat is my guess.

6.7ft @ 9s from 23° (NNE)
Very confusing readings at the buoys, it doesn't make much sense that Pauwela shows 7f 12s from 339 and Waimea doesn't, but we'll take it. Better double check later if it's a fluke though. What's more reliable is the 9s NNE energy reading, which is what I surfed both at the Bay and at the harbor yesterday. And what's even more important is the wind conditions that will finally make those waves a lot cleaner on the north shore.

The custom Maui Surf Report wind model kindly provided by Meteogram is not updated this morning, so we'll have a look at the 10 days Windguru table instead, which looks as wintry as it gets. Expect those wind directions to change daily, as the closeby weather patterns unfold. 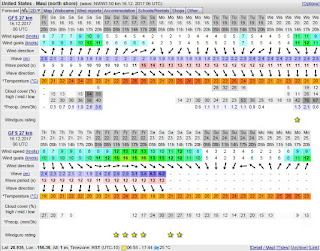 North shore shows a couple of weak fetches, but what's most noticeable is the area of no wind in which we are immersed.

South shore offers a small southerly fetch for the third day in a row.

Morning sky. The red arrows show the air circulation around a local low. 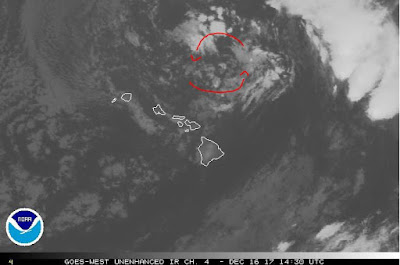 Meanwhile the other WRF/ARW SOEST wind model (below) has been working reliably. There was a time about a month or two back where it was down ~week, right after I recommended it to you, of course ;). We'll see if that happens again now that I again mention it to you ¯\_(ツ)_/¯ (most likely it was caused by an upgrade, unless someone just took a vacation). Lately it has been available when the other model is not. I compare it to the Meteorgram everyday, and I still believe it's generally more accurate. But of course not as pretty. I think the main difference is the meteorgram model shows +43 hours for a noon forecast, and this means the model is showing the forecast 43 hours forward from it's initial point. Where for the SOEST it's only +10. So the SOEST model is initialized every morning at 2am, while the Meteorgram WRF data appears to be 43 hours earlier from that same noon point. I asked Dan about this and he wasn't sure what the deal was. At any rate, the two supposedly same models occasionally come up with different forecasts, and IMHO the SOEST has often been better. So worse case, use SOEST as your backup (and note at this moment it forecast SSW winds for Kanaha around 15-20, and the actual reading is SSW 15 gusting 19, close enough!)
http://www.soest.hawaii.edu/MET/Faculty/wrf/arw/arw_maui_loop_10mw.html

Thanks a lot Ben. I noticed the "age" difference between the two too, which of course makes the SOEST one more reliable, I just can't stand the poor graphic representation of it. Good backup, as you say. Cheers.