SUP foiling session for me yesterday.

I'm gonna use this sequence I shot yesterday to break down how to pump a foil.
1) Starting from the top left and moving clockwise, you can see the foiler finishing his pumping cycle by extending both legs and pushing the board down towards the water (hopefully without touching it).
2) Then he lifts his front foot first and let the nose of the board come up.
3) Next, while he's still lifting his front foot, he starts lifting his back foot too. Both legs are bending and both knees are going towards the chest at this stage.
4) In the last picture he now starts to put some weight back on the front foot to bring the nose down. The next photo would show him doing what he was doing in the first one: extend both legs to bring the board closer to the water and then start the cycle again.

It's a pretty instinctive movement, but it's not a simple jumping up and down like a kid would do on a trampoline, because in case of a foil pumping, the front leg precedes and the back one follows.
Happy pumping! 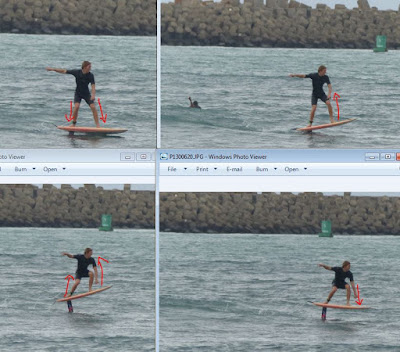 5am significant buoy readings
South shore
No southerly energy at the buoys, the Surfline forecast calls for 1f 15s.

Plenty energy from the NNW-N at the buoys, the problem will be the northerly wind that unfortunately comes with it. Seek for wind sheltered spots that like the N swells.

Wind map at noon shows moderate NE winds. They will be a little lighter in the early morning, but not by much as the north shore sensors are already reading between 14 and 18 mph at 7am. 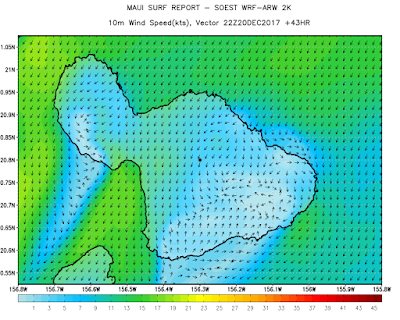 North Pacific offers a distant, wide, but not too intense WNW fetch and a close N one.

South Pacific shows a small fetch east of New Zealand and a bigger stronger one way down south of the Tasman Sea. 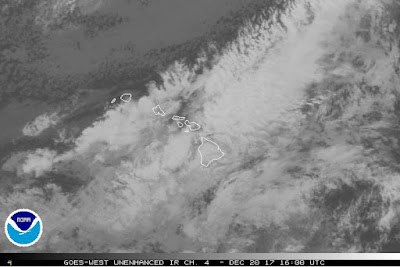 As a matter of fact, we got quite a bit of rain around us.

Email ThisBlogThis!Share to TwitterShare to FacebookShare to Pinterest
Labels: foiling

Hey GP,
Haven't seen any feedback from you about the Foilmount (on your short board) since the first day you mounted it.
Have you had enough time to check it out and /or compare to a prone surfboard with a Tuttle box installed?

Wondering if you have any more review type info to share?
Specifically; is the increased drag & weight of the plate & Tuttle box adapter something you notice? (Increased drag during paddling & weight during flight) or not noticeable?
Any insight you may have since checking it out?

Trying to decide wether to mount one, or keep saving up for a board with a Tuttle box. Thanks in advance for the info!

I only had a total of 4 sessions on the converted surfboard, not enough for a proper feedback. The thing is that I catch so many more waves with the SUP that I'm not too motivated to try again.
But since you ask, I didn't notice the weight during flight. I did notice the drag, but I've never foiled a prone board with the tuttle box, so I'm not sure if the drag is induced by the foil or the adapter (probably both). For sure the sticky plate and the adapter add some drag, but I can't quantify how much.

i hear you. thanks for the reply.
you see you on (above?!) the water. Dan