I find it appropriate to start the first report of my 2018 Fiji trip with an empty Cloudbreak beauty. 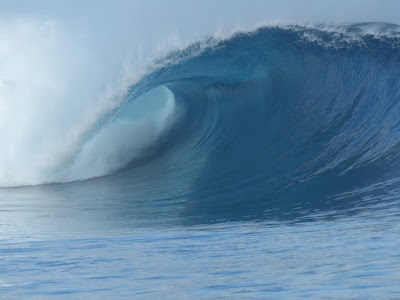 Let's make it two. The ant eater trunk lip was a clear indication of solid size and low tide. Considering that the day before I spent more than 10 hours in a plane (the Fiji Airways Tuesday flight has a stop over on Christmas Island) and that I slept barely 5 hours at the hotel I booked in Nadi (the Namotu week only starts Saturday), I wasn't feeling exactly 100% and wisely decided to pass. 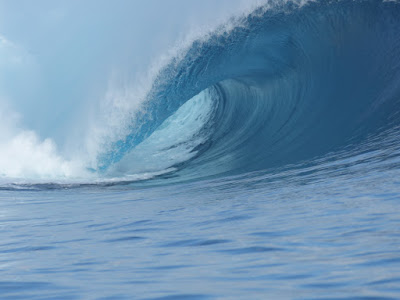 Perfect waves like this made the possibility of a quick paddle out very tempting though. 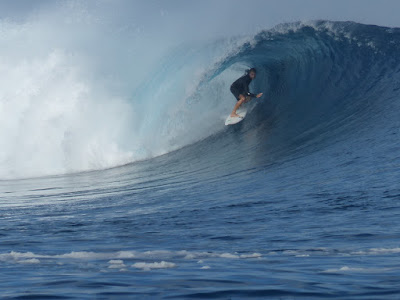 The other decisional factor was that I had a board with which I only had 2 surfs: a 6'7" Maurice Cole that I scored at the last minute on Craigslist after I realized that my boards were all too small for the forecast. I'm not a fan of big waves and I happily don't really own a proper gun or stepup. 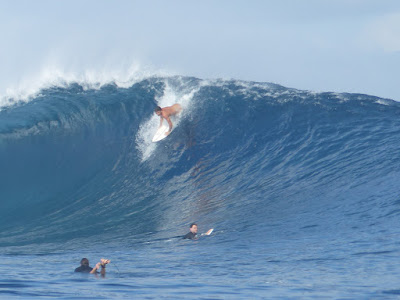 Same guy, different wave. Later I heard of a pretty bad injury happened to a really good surfer warming up for the weekend upcoming massive swell. He took off at Shishkebabs, bailed, fell on his board and completely blew his knee. I think I made the right call. 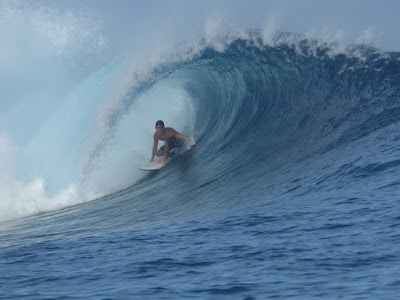 I actually ended up making the call for the whole boat, as the surf guide was honestly a bit unprepared (didn't even know the tides!). "Let's go check Swimming Pools, it'll be onshore, but still very light, so most likely clean. And then for the second session we move to Restaurants, where the tide will be mid and rising and the wind from a much better offshore direction".

This is the only shot I took at Pools before jumping in the water for a pretty fun session. Mostly head high, but with some head and a half sets. If you ever surf Pools in Namotu, my best tip is: keep your eyes open when you duck dive. Not for safety, but for enjoyment. The reef is SO beautiful and the water is SO clear. 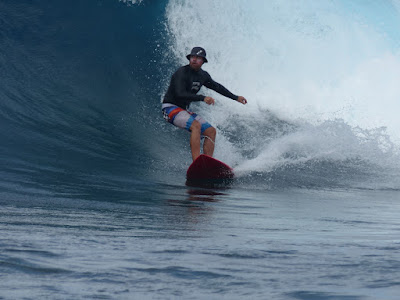 Below are three shots I took AFTER a ridiculously good session at Restaurants. In my previous two Fiji trips, I never really had the pleasure to score this incredible wave in good conditions. Not that I particularly missed that, since I had plenty epic surfs at Cloudbreak, but I was definitely curious to see how good the wave that so many friends told me about was. A wave so good that Barbarian Day's author William Finnegan and his buddy decided to camp on a uninhabited Tavarua for a few months shortly after it was discovered, and surf it by themselves whenever it was breaking. 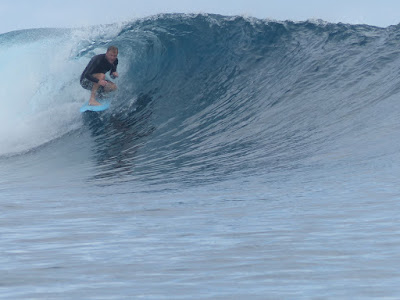 Unfortunately, the photos don't even remotely close render the perfection that I witnessed in that hour and a half around the mid tide. When a set came (and that happened pretty consistently too, making the already light crowd almost invisible), EACH SINGLE WAVE was a 10. And if you think I'm exaggerating, these are the words of a Brazilian guy I met in the lineup: "I've been here four months, and this is the best day at Restaurants. Not the biggest, but the best shape for sure".
And as he finished his sentence, a new set loomed on the horizon and we were both scratching for the outside, so I couldn't ask him the fundamental question: "and how did you manage to be here for four months???" 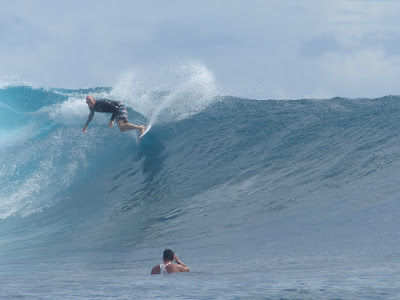 Thanks to the enlightening book "The untethered soul" (which I will never stop recommending) , in the past few years I've been in a head space in which I'm just loving life the way it comes to me, without trying to change it to make it conform to the way my mind thinks it should be.
But in the case of this day, that took no effort at all, as it already was the way my mind wanted it to be. Actually, a lot better than that. 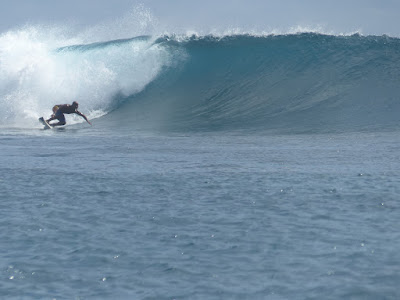 And it might get even better, as it looks like I'll live long enough to enjoy this sunset. Wish me luck though, you never know when we're gonna go... (whether we go fast or slow, John Cruz would add).