Two shortboard and one prone foiling session for me yesterday, probably the very first one in which I managed to have a very minimal amount of fun. But my brain can't avoid the comparison to the strapped SUP foiling and that's still a losing one at the moment. I should wait until I get (a lot) better, but in the meantime I'm probably gonna put a strap on my prone foiling board.

I saw Pete Cabrinha (member of the "strapped" crew back in the days) with some inserts on his board and inquired him about it. He's enjoying riding his prone board strapless, but he understands how I feel about it:
"You feel disconnected without the straps, uh?"
"That's right", I answered. "I pump the board with the intensity I'm used to and the front foot comes off the deck!"

Below is Yasu aiming for the beach in a day in which the lovely cloud cover made the winds stay light all day on the south shore. 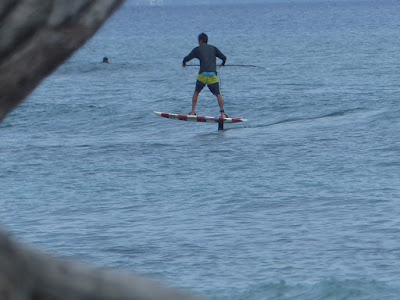 South swell still up at the buoys, one second shorter than yesterday, which saw knee to waist high with occasional belly high sets and long lulls between them. Should be similar today, stay tuned for a beach report.

Wind map at noon calls for NE winds and a possible Kihei downwind run. Have fun you guys, would love to join you, but I got to rest those triggered fingers.

South Pacific has nothing of relevance. 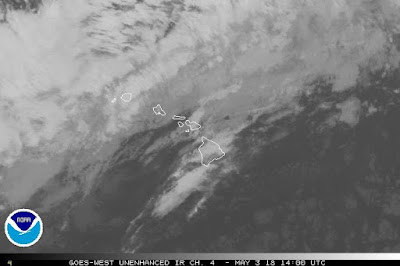