No water action for me yesterday and no photo of the day, so here's my coworker Russ showing off a lovely board from his new sponsor Quatro. "Best production board I've ever ridden!", he said. 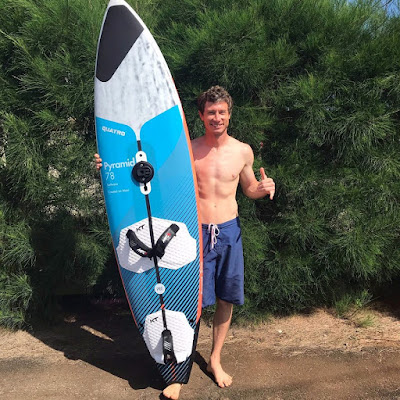 Lovely long period energy at one of the outer buoys. As always the case with south swells, there has been way too much hype for this swell. Pat Caldwell puts it into the right perspective: primary fetches aimed west to east so no large surf is expected locally. But there should be an uptick relative to the low conditions the first half of May. Which won't take much, I add.

Here's his more complete explanation of what happened.
The mid latitudes SE to SW of New Zealand entered an active late austral Fall cyclonic pattern 5/7. A series of hurricane-force systems tracked east near 60S from south of Tasmania to south of French Polynesia spaced about a day apart. Primary fetches aimed west to east so no large surf is expected locally. But there should be an uptick relative to the low conditions the first half of May.
The first system was exceptionally strong in the southern Tasman Sea with central pressure below 950 mb. A buoy south of New Zealand measured seas to 23 m or about 75 feet. Wave Watch III suggested these were the peak seas, with a weakening as the system moved into the Hawaii swell window SE of New Zealand 5/8. It tracked rapidly east.
Given the wide fetch and immense height of seas, angular spreading should bring swell locally to Hawaii. The onset is expected on Sunday with wave periods in the 20-25 second band. There should be a slow rise into Monday with inconsistent set waves above the summer average from 185-220 degrees.
The event should be more consistent and peak in size late Monday through Tuesday. It should drop to near the summer average by Wednesday from 180-220 degrees.

Below is the collage of the maps of May 6, 7 and 8. As usual, the red circles are the fetches oriented towards us. This time I also circled in black the much stronger fetches oriented more zonally (west to east). I will post a report at one point in the morning as I have a business appointment at 5.30am... my clients are crazier than me!

Why so early? Because I care for their safety and this is the time of the year when full/new moons make for bigger tide swings. Below is the Lahaina tide chart for this week taken by link n.12, which is great since you can select the specific Maui location. Unfortunately it doesn't work on my phone (it gives me the San Francisco tides!), so I recently added another one (n.13) which is only Kahului, but it's pretty cool since it puts a small "+" to show where we are in that graph. Make sure you refresh if you check it from your phone.

Just NNE windswell from the fetch we see in the fetches map below. Hookipa will be small, weak and windy. But not flat.

The wind model didn't update and the wind map at noon is more than 24 hours old.

I am not sure if that fetch is oriented towards us, because it just out of the great circle rays map on the right, but I circled it anyway. Nothing else other than that in the South Pacific. 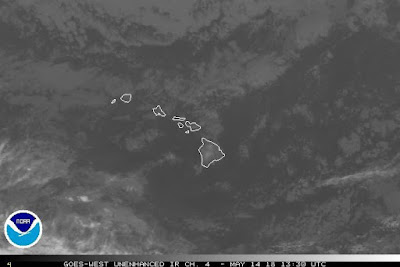