FYI: yesterday I wrote an article called "Foiling: SUP or prone?". This morning instead I already posted a Hookipa beach report before/below this call.

A shortboard session for me yesterday as Hookipa finally had decent conditions for that after a long time. Later in the day the windsurfers hit the water, photo by Jimmie Hepp from this gallery. 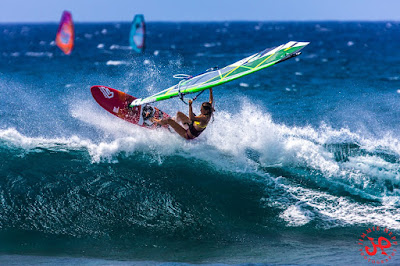 5am significant buoy readings
South shore
No indication of southerly energy at the buoys, the Surfline forecast calls for 1.5f 11s and I got a report of the usual knee to occasionally waist high yesterday.

Smaller than yesterday is what the buoys say at the moment and that's what I saw at Hookipa. But it is predicted to come up a bit again. Here's how Pat Caldwell explains why: The main source from the new pattern 5/9-11 was a large fetch of strong to near gale breezes from the Aleutians to near 40N. ASCAT satellite showed a direct aim at Hawaii 5/9. Shorter-period waves of 8-12 seconds from 325-345 degrees should fill in locally early Saturday (late Saturday in Maui) and peak late Saturday.
Below are the maps of May 9, 10 and 11. I do like the fetch on the 10th, let's hope that energy doesn't arrive and peak during the night.

North Pacific starting to look pretty grim with only a small/weak fetch.

South Pacific not really kicking in either, but that fetch will keep the background energy going. 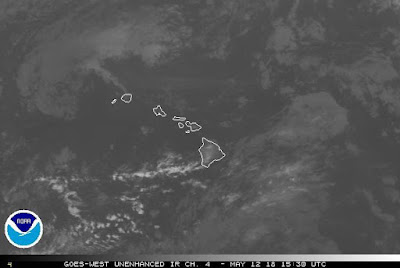