A shortboard and a prone foiling session for me yesterday. A few photos in between.

Hanging ten in that section and in front of dry reef was a very ballsy move without a leash. 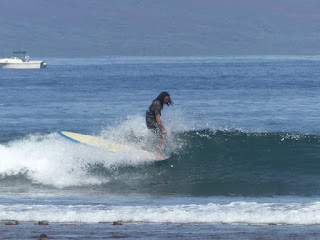 It ended up with a walk to vana land. Might as well enjoy the view. 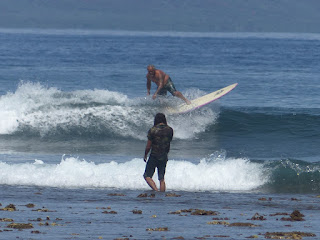 Before catching the foiling bug, Gerry was mostly body surfing. You can tell he's fit.
He was foiling all by himself, so I had to join him for an arvo session. Best prone one for me so far. 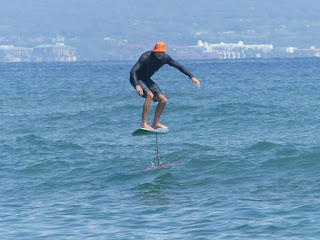 South swell doing what Pat Caldwell describes here.
Severe gale to hurricane-force low pressure systems SW to SE of New Zealand spaced a day or two apart starting 5/7 has returned surf in Hawaii to near the average. The sources mostly aimed west to east, so swell is arriving through angular spreading. This leads to less consistent arrival of sets as has been the case the past two days.

The first event peaked Tuesday PM 5/15 and is slowly declining 5/16. Dispersion, or the spreading out of swell trains based on wave period, since longer waves travel faster, allows events from remote sources to linger for several days. The NOAA southern buoys 51003, 51002, and 51004 show the dominant wave period has shifted down from the 17 seconds at the peak to 15 seconds 5/16. It should continue a slow drop in wave period as breaker size declines toward background levels on Friday as a new event fills in.

We'll talk about that tomorrow, let's stay focused on today, as those numbers at the buoys will guarantee more fun waves for us to enjoy. I'll beach report before 6.30am.

3.7ft @ 8s from 42° (NE)
1.3ft @ 12s from 30° (NNE)
Pretty small energy at the Pauwela buoy for another very small day on the north shore. Size should increase tomorrow as a new/modest NW shifting NNW swell tops out, as reported by the Surfline forecast.
Wind map at noon (finally up to date).
﻿

North Pacific only has a tiny little fetch north of us.

South Pacific shows a solid SSW fetch aimeing at us, but unfortunately New Zealand will block most of that energy. 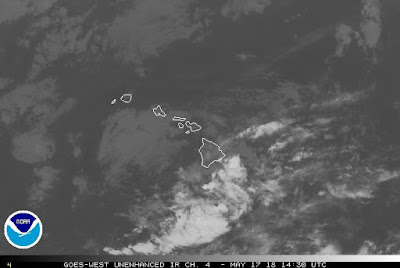 Aloha braddah, my name isWilliam and I’m the guy that lost his board that shallow low tide day at mala. Did you happen to get more pics while you were there? Great blog by the way!

Aloha William,
unfortunately I delete all the photos that I don't end up posting... way too many to keep!
Thanks for reading!