No water action for me yesterday, as I couldn't find anything that pleased me.

Here's a photo from three years ago, a time in which I thought Facebook took over and I was only posting there. The caption was: "caption needed" and the comments went off. Commenting on this blog is not as friendly, but go ahead if you feel like. Tomorrow I'll post a shot taken a few seconds before this one to explain how it happened. 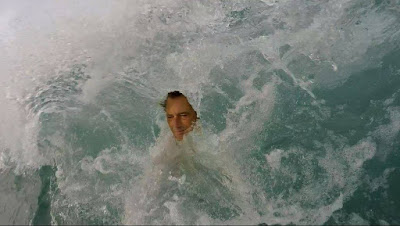 1.7ft @ 11s from 347° (NNW)
Little NNW energy on top of the windswell, yesterday it was 13s and there were actually some decent waves at Hookipa in the head high range, to the point that windsurfing looked like fun. My guess is that it will be smaller than that today.

Wind map at noon. Early morning will be calm everywhere instead.

North Pacific shows a wide but very weak NNW fetch. The low I marked with L will intensify soon and tomorrow its winds will be much stronger. We'll have to wait and see how big is going to be the portion of them oriented towards us. 9f 14s predicted by Surfline on Tuesday.

South Pacific has a small fetch.

Morning sky. Once that front will make it over us (it took forever), the wind is unfortunately going to turn NE and we all know how bad that is for surfing on the north shore. 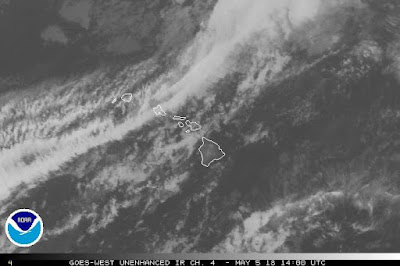