A longboard session for me yesterday. Here's the shot that explains the one I posted yesterday. And here's the explanation of it that I provided back then in a comment:

The shot is indeed trippy and deceiving.
This one will clarify it, since it was taken a fraction of second before that.
Just a common (for kooks like me, at least) case in which you realize you're too deep for a wave you're paddling for and at the very last moment you decide to sit back on the board and not go for it.
So, no wipeout at all and all good. In that occasion, at least.
The smile I have is not for posing. It's a smile that says to myself:"there we go, yet another beautiful one that will go unridden because you're not in the right spot"... 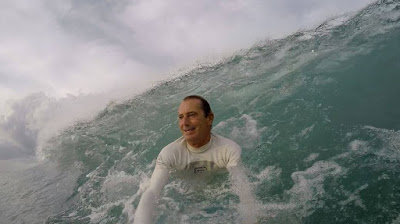 As usual for the outer buoys (unless there's absolutely nothing else in the water), disregard the directions and focus on size and period. I like today's numbers, they indicate that that sliver of 17s energy I pointed out yesterday filled in and it's now 14-15s. Yesterday morning it was the reported size (knee to waist occasionally higher), but still all about the 11-12s. Don't think I'll have time this morning to go there, so no report from the beach.

Those numbers could be potentially fun at Hookipa, but not with sideon wind like it is predicted to blow all day. Possible beach report later.

North Pacific shows the fetch associated with the close by forming low getting stronger and a new small one in the NW corner.

South Pacific has a couple of fetches that without the map on the right I would have not spotted. The Earth is curved and a flat map doesn't really work, specially towards the poles. That's when the great circle rays maps come into place. 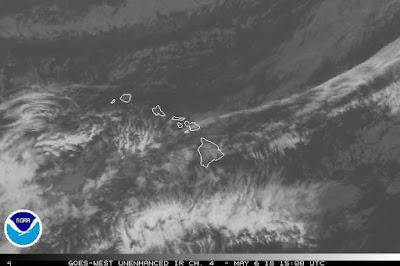