A prone foiling session for me yesterday. On the north shore, the NNW swell did arrive and the windsurfers enjoyed the head to logo high waves. Photo by Jimmie Hepp from this gallery. 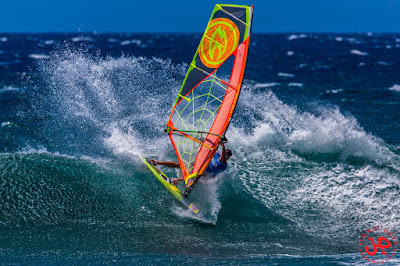 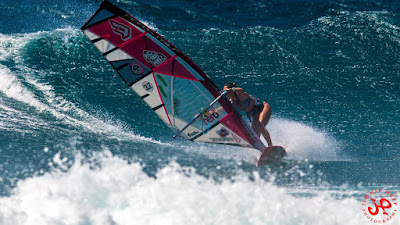 Below is the collage of the Maps of May 11, 12 and 13 that shows the fetches directly aimed at us in red and the main swell direction and its angular spreading in blue. The onset of a swell generated down there is slow even for fetches aimed more directly at us, since the longer period sets have 7-8 days of time to distance themselves from the slower shorter period ones trailing behind. But in case of the angular spreading, the consistency is even less, as the amount of energy that manages to disperse away from the main direction is obviously less.

Below are the Pauwela graph and the new (horrible) Surfline offshore swell forecast. The line indicating the current swell is the purple one, if you can spot it. The rising blue one on top is the mounting windswell. The indication of the wave face size is (as usual and as for every other surf forecast sites) completely useless, but now I have to show it if I want to include the indication of the day. Waist to stomach high... where? Everywhere on the north shore? Hopefully Jimmie Hepp will be shooting the windsurfers at Hookipa again and tomorrow we'll see much bigger waves than that.

Here's my approach, once again. Look at the offshore swell forecast. Compare it to what the buoy is reading. Go to your spot and observe the wave height. If you do this for a couple of weeks, you'll know already much better than ANY spot specific forecast on the internet. Cheers.

Wind map at noon (NOT updated this morning).

North Pacific shows a small and weak fetch in the NW corner and a building E windswell fetch.

South Pacific has a small fetch way down the Tasman Sea. 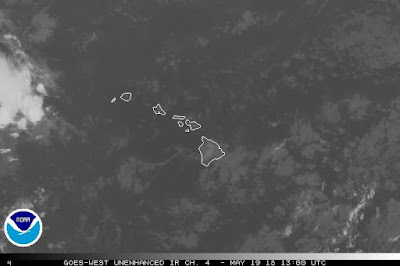 PS. If some other Surfline user doesn't like the new look either, here's the email I sent them. Please contact them too and ask them to go back to the old graph. Thanks.

Attached is a comparison of the page I check the most on Surfline: the Maui offshore swell forecast.

It's pretty evident that the old graph was much easier to read, as it has thicker and more solid lines, with brighter colors.
I also liked that you could turn each single swell off the chart (didn't find that option on the new one). And lastly, I prefer the sliding bar MUCH better than the four separate groups of days, as it's a lot easier to see the continuity of the swells throughout the 17days period and focus on the set of days of my interest instead of the preset ones. This last part got even worse on the cell phone, as there it shows only one day at the time.

I  might be a peculiar Surfline user (I don't even bother checking the spot forecasts, as with my local knowledge all I need is the offshore swells prediction), but IMO that page is now worse than it used to be.