One long prone foiling session for me yesterday, as I'm finally starting to like the discipline. Still not even close to SUP foiling though. The reasons for the improvement are the footstraps pictured below. My good old foam rib shield came handy to avoid the major bother that paddling with a footstrap under your chest would cause. 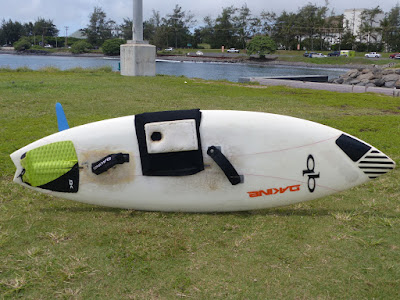 I'm preparing an article with a detailed explanation of why I like SUP foiling better. Maybe I'll post it here later today, so come back and check if interested


4am significant buoy readings
South shore
No indication of southerly energy at the buoys, the Surfline forecast calls for 1.7f 12s.

NW swell holding steady at the NW101 buoy in the graph below (left), so we can expect Pauwela to do the same. The Surfline forecast (on the right, cleaned up of all the other swell lines) seems to confirm that. I'm guessing head high and very clean conditions this morning, but I'll post a beach report at 6am.

Wind map at 6am shows a classic lack of wind down the coast when the trades have a bit of south in them like today.

Wind map at noon looks quite different, as the wind seems to always find its way down the coast later in the day. That happens because the Haleakala gets heated up and sucks colder air from the ocean, so the effect is stronger when there's no clouds.

North Pacific shows that the long and wide NW fetch we saw yesterday is a little smaller, but still in place. Still weak winds though, but that should male for a fairly long lasting mid size, mid period swell starting next week.

South Pacific shows a decent but very remote fetch. It's gonna move E of New Zealand and be closer to us, and Surfline has 2.8f 18s predicted for Saturday 19 night, the biggest numbers of the south swell season so far. We'll see if it happens. 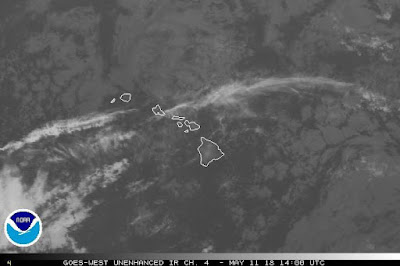