Longboard session for me yesterday. Here's an example of a small wave on the Lahaina side, but, as reported in the second beach report, there were occasional sets twice as big. 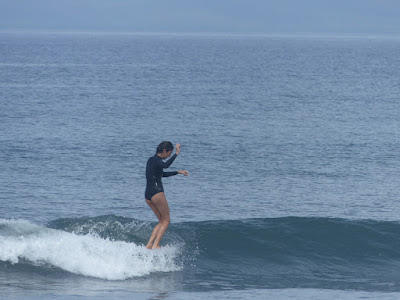 Interesting numbers at the outer buoys. As you guys know, I believe that the direction those buoys indicate is totally unreliable (unless there's absolutely nothing else in the water), so I don't even look at it anymore. But I would expect the period to be much more consistent and instead today it isn't. Whatever the period is, there's still energy from the south. Unfortunately, I don't think I'll have the time this morning to go that side, so no reports from there, but there should be waves.

Tell you what, if those 4f 8s were from 45 (for example) instead of 74, Hookipa would be pretty fun. It might still be, I'll post a report as soon as I see it.

North Pacific starts to show the first signs of the counter clockwise circulation that, while moving closer and closer to us, will create another close by northerly fetch that will generate another big swell like last weekend. 8f 14s from 354 on Monday night and three back to back moderate but longer period NW swells after that. Winter has gone to overtime. Cheers to that.

South Pacific has a couple of micro fetches that won't do much for us.

Morning sky. That front is taking a record time to move over the islands. Kauai must be getting slammed by the rain again. 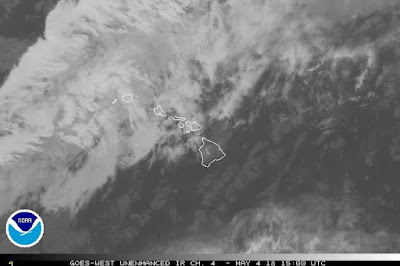