A SUP foiling session for me yesterday, in conditions that would have been a 2 for surfing while I had a 8 in terms of fun. With the foiling it's pretty much the other way around: onshore is the new offshore. And vice versa! (foiling in offshore wind sucks)

No photos of the day, here's one of those very heavy Tahitian lips in a photo by Ben Thouard. 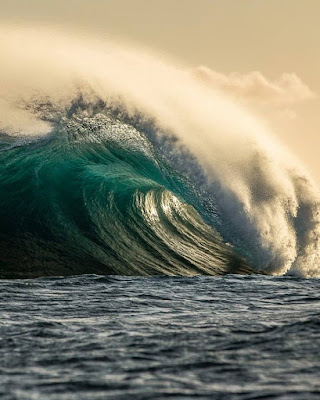 The outer buoys have pretty consistent readings of the new low long period swell, so that means that there are some waves on the south shore. I will probably post a beach report sometimes mid morning.

Let's have a look at the fetch that generated this swell with the help of Pat Caldwell's words: A severe gale further south to the S to SE of New Zealand 4/24-25 aimed highest SE of Hawaii. Long-period forerunners should slowly fill in late Tuesday. The event should peak on Wednesday within background to summer average levels then drop Thursday into Friday.

Below is the collage of the maps of April 23, 24 and 25. As you can see and as uncle Pat says, the fetch/swell is aimed well SE of us. We're getting the angular spreading and that means low frequency of sets arrival.

The low pressure that generated last weekend's big swell has weakened and is moving to the NE. The readings at the buoys reflect just that. I surfed Hookipa this morning and it was chest to head high and clean (as reported in the beach report, today posted before/below this call). The diminishing trend will continue in the next couple of days and take us to a nearly flat end of the week.

North Pacific shows the low moving NE and the associated fetch getting smaller and weaker.

Couple of weak fetches in the South Pacific. 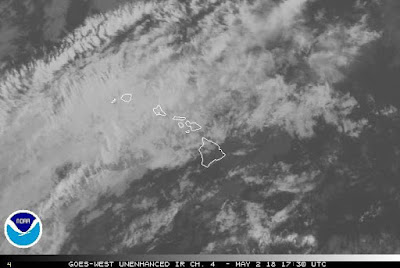