Yesterday early morning saw some small (but very well groomed) waves at Hookipa. The afternoon saw some port tack sailing, but in waves so small that I don't even feel like grabbing frames off facebook. I'd rather talk about the big swell that everybody is expecting.

Where do we start? From the usual place, the buoys! These are the 5am graphs. If you guys want more updated readings later on, the link is on the right (n. 11).

NW buoy seems to have peaked in the late night around 16f 15s from around 310-315. That's a lot less west than predicted, but don't forget that:
1) the direction shown by a buoy is the dominant one, the one with the most amount of energy associated. there's plenty more energy coming from other directions around the dominant
2) the NW buoy is at a latitude that is more north than us. The part of the swell that's hitting it is probably more likely less west than the more southerly part of the swell that will hit us. How do I know? Why do I think I publish the wind map and circle the fetch every single day? Those are very important to remember the history of the generation of a swell.
Poor Uncle Pat Caldwell doesn't have graphic tools to do that and he tries to describe with words what happened. That is hard to follow even for me sometimes... but I do recommend reading him as often as you can (link n. 9).

Waimea seems to have peaked too, but that could be a temporary peak. Maui is just starting to ramp up, but 4f 17s at 5am means that the big Jaws waves will not be there in the morning just yet. It'll be an afternoon affair. Yesterday I was sure I was gonna drive away from Hookipa in the dark, this morning I'm not even so sure about that! The validity of the evening plans is often nothing. Got to do your plan in the morning you guys, with the latest info from all the websites... including this one.

Weather map shows a massive low. This February seems to be totally dominated by massive lows.

Massive lows bring massive swells and this is the ww3 prediction for tonight at 6pm, which could be the peak of today's action. But not necessarily of the next couple of days. The swell will go more north (or less west, if you like it) and that might make it even bigger in Maui with less shadowing!

Not a huge fan of this kind of graphical representation of a swell, but the red/purple blobs do get people excited, so, since this morning I did go on the ww3 prediction, I'll post this map for NEXT Tuesday too. Beautiful westerly one, generated far from us, hence probably cleaner.

Now, this is a graphical representation that I dig instead! I call it the wind map and it helps me circle the fetch and the local wind directions. Still massive fetch, we'll have waves all week.

Local winds will be WSW in the early morning (good direction for the north shore) and WNW (bad direction) later in the day. I put two arrows to show those directions. Just try to imagine the whole thing shifting east.. well, not the islands though! 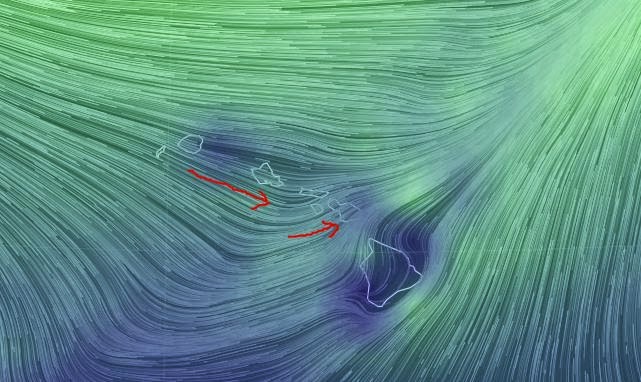 Prediction reflected by both models on the windguru page. They both call for a wind shift around 10ish.
Notice the amount of rain predicted by the NAM3 model right at that time. And I'm supposed to teach windsurfing to a bunch of kids... right.
I don't think that even the advanced windsurfing will happen today. Looks better tomorrow. 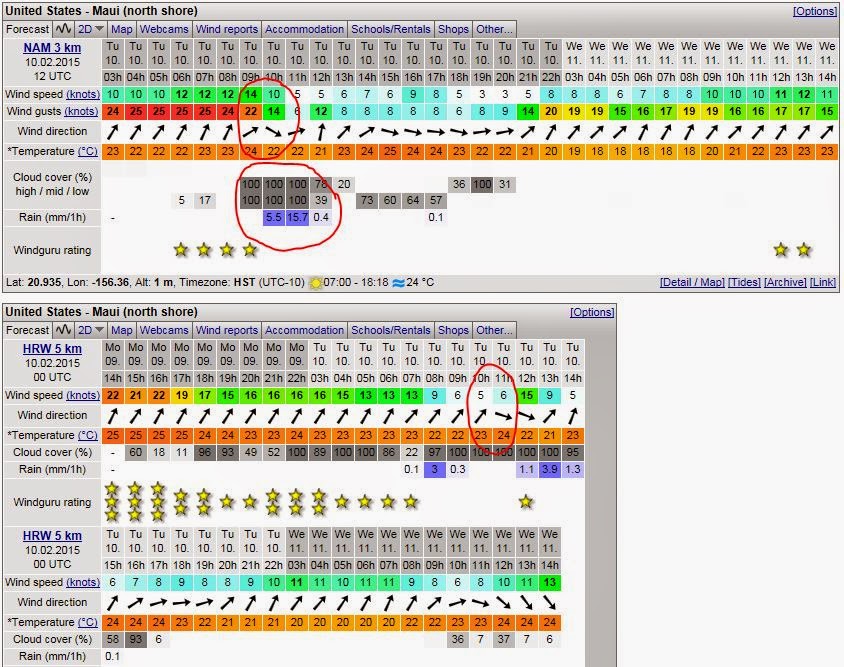 Last thing is: this is a closely generated big swell. I hope you guys know by now that that means: mixed periods and sizes, hence not particularly clean. So, probably no Hookipa for me, now that I just thought about that...


Have fun in the sun everyone!


PS. All the sources for this post are permanently linked in the links section on the right of this blog.
Posted by cammar at Tuesday, February 10, 2015