Yesterday I said it was going to be one of the worse days of the year because of the strong Kona and I guess the complete lack of surfers at Hookipa confirmed that: just way too windy.

Of course, some windsurfers like strong wind, so they were out there and they were riding Middles. Smaller waves and even stronger wind at Lanes, no surfers at Middles... why not?
I've never done that, so I went out too. I lasted 5 waves, a couple of which, the ones without a crazy gust on them, were actually quite fun. I surfed Middles like a thousand times, it was fun riding it for once at a different speed.

Just to try to describe how strong the wind was, let me mention that every time I stuck a tack on the outside, I was in disbelief! And there was one time, in which I judged too dangerous to even try a tack (or I decided I stood no chances) and, like the good old days, I shamelessly dropped the sail in the water on the opposite side and water started on the new tack.
I sailed 20 minutes, it felt like 2 hours on my arms. 40 knots is my guess in the strongest gusts.

I took one quick shot before leaving and it happened to be Josh Stone who instead, because of his enormously better skills, didn't seem to mind the wind too much. He's the right guy to rig next to.
At one moment I see a super strong gust that pulverizes the lip of the waves of a set.
I point it out to him and say:"Oh my god, Josh! Look at that!" with my face expressing fear and a bit of disgust, and he replies:"that's awesome!". He was frothing. 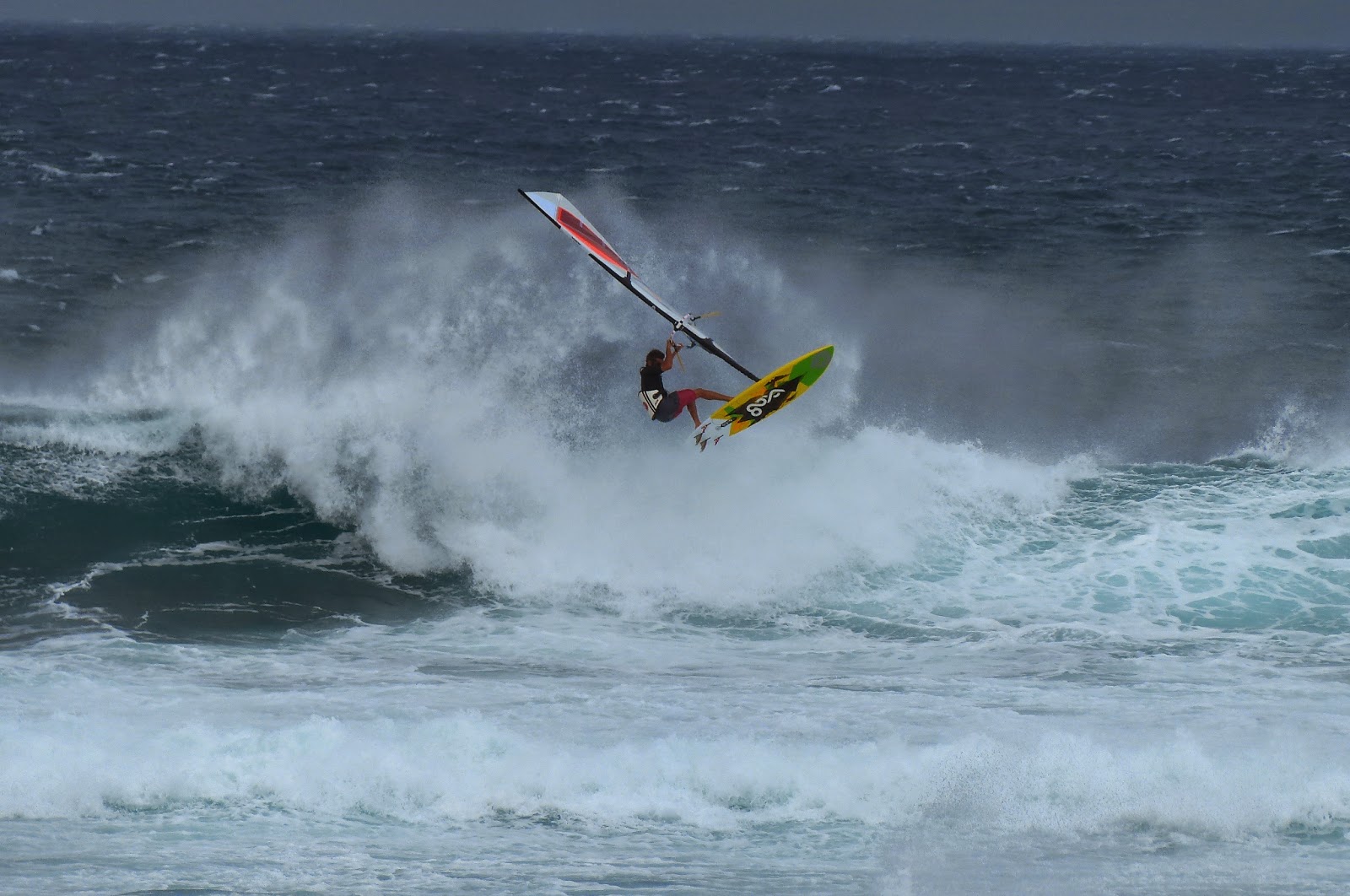 Everything will be different today, because the front has passed and the wind has changed direction. Note the westerly fetch that will be the main waves provider for next week. 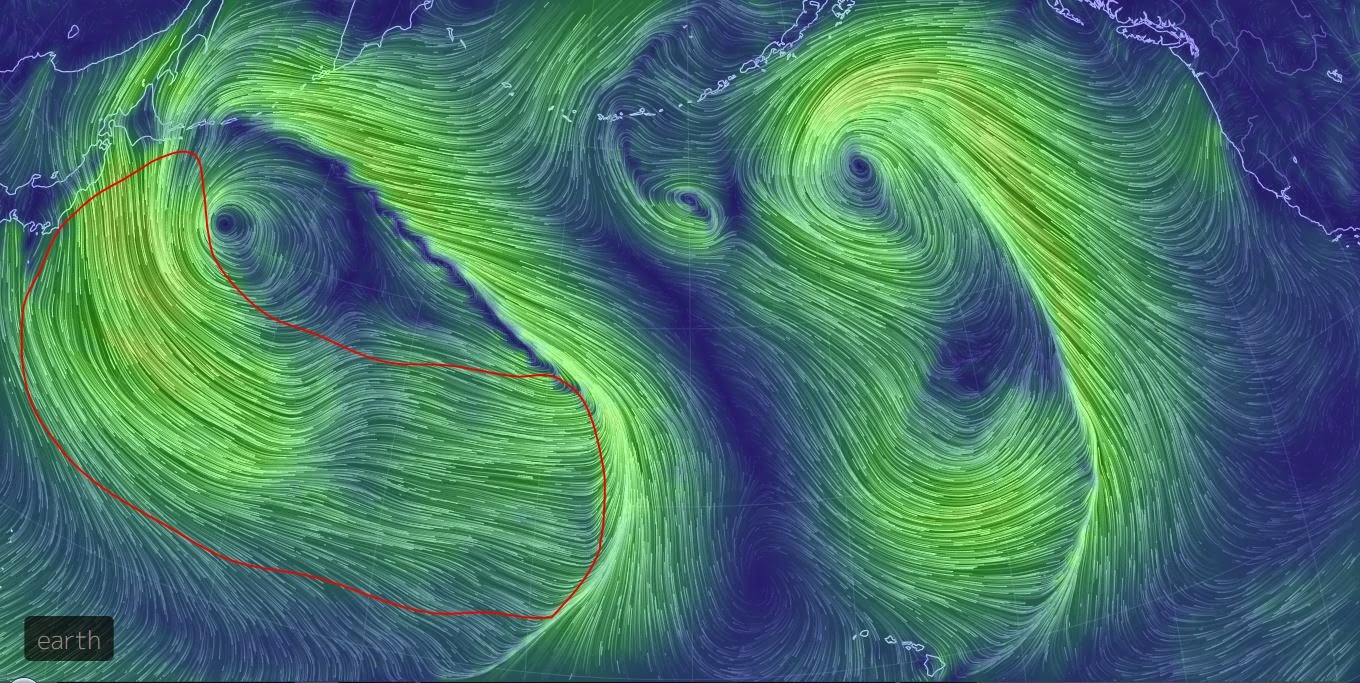 The wind should be light onshore all day on the north shore, even though MC2km calls for a more easterly direction for the second part of the day. I don't particularly believe that, and nonetheless it won't be enough for sailing. If you want to windsurf, check Kihei, which saw some port tack action yesterday too. 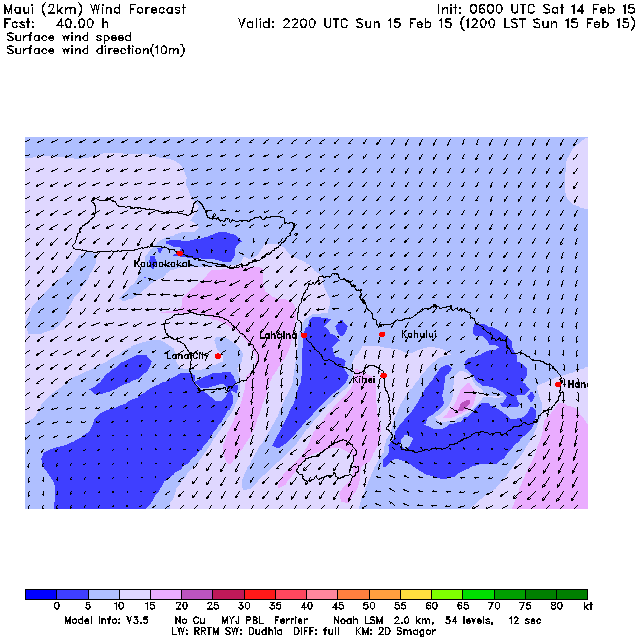 Last, but most definitely not least, let's look at the buoys. Below are the graphs of the NW and the Waimea buoys. I pointed out the super steep climb on the first. It went from 2 to 19 (and 16s) in 6 hours. I put the same arrows on where I think it's gonna happen in Oahu.
Note: that steep climb of the long period component would have not been possible to detect on the NOAA buoy. The first 16s reading there is at 1am when it's already 20f. And how and when did it become 20f?!?!?
Trust me on this guys. The break down in subcomponent swells that Surfline does is 100 times better.

Below is Pauwela and Lanai. The two arrows on the first one is where I think the steep climb from the NW is going to happen. The arrow and dotted red line on the Lanai one, shows instead the rapid decline of the windswell associated with the strong Kona, which died just before sunset yesterday. Too bad it's already kind of small, it would have been fun to surf it without the active wind on it.
Kiehi residents, get on it before it's gone!
The north shore still has quite a bit of NW energy in it (6.0ft @ 11s from 325° at the 6am reading), but expect it to be very unclean.

Not an easy day to choose where to surf. I still haven't made my call. One of those days in which I need to check spots and webcams...
Have fun in the sun everyone!