This is the idyllic vision you had if you were at the right spot at the right time yesterday. Photo by  Jason Hall. 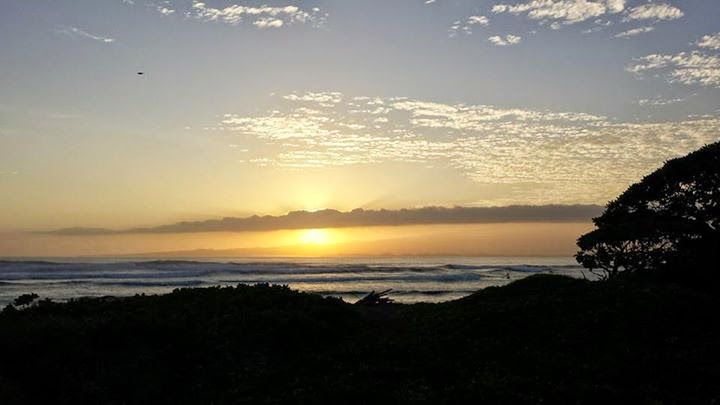 The size was much more friendly than the day before, which saw some DOH sets, even though someone using the hawaiian scale called it 3 to 4 feet.
I hope I won't offend anybody, but as long as I'll have this blog I will never use the non sense Hawaiian scale.
And I'm gonna spend a few words on this.

The Hawaiian scale measures the waves from the back. The day I'll see someone surfing the back of the waves, that will make sense, but since then it's a complete non sense.
I know there's historical reasons why it got adopted, but I could not care less about those. Things change and we move forward. I do.

That day the buoy read 9f 10s from around 70. That's the sizes I use on this blog.
Once such a swell hits a surf spot, the size of the actual waves can change a lot depending on the spot and its orientation. So if someone asks me how big the waves were at that particular spot, I always use body parts, because that cannot be confused. If one says shoulder high, it's immediately clear that he's talking about the face of the wave, not the back!

So for me that 3 to 4 foot day was head and a half with occasional Double Over Head (DOH) sets. I got two of those on the head and they pushed me so far back in that I had to get out of the water and walk to a better launching spot to make it back out.
Fortunately I know what most of my friends mean when they use the Hawaiian scale.
3 feet can mean anything from shoulder high to almost DOH, depending on who says it.
So I have to remember what are John's 3 feet, Michelle's 3 feet, Jason's 3 feet, etc...
It's ridiculous, it offends my brain and that's the reason for this rant.
Thanks for reading, maybe someone will be convinced to abandon it thanks to it.

Today.
Pauwela buoy reads 5.2ft @ 10s from 65° (ENE) and that's all there is. I'll post a photo from Hookipa shortly, which is going to be smaller than yesterday since yesterday it was more like 7.5f 10s, right?


This is the wind map that shows a couple of fetches and some bad northerly winds approaching.

There's also some clouds over the islands (the tail of a front), as shown by this 6.30am satellite photo.﻿ 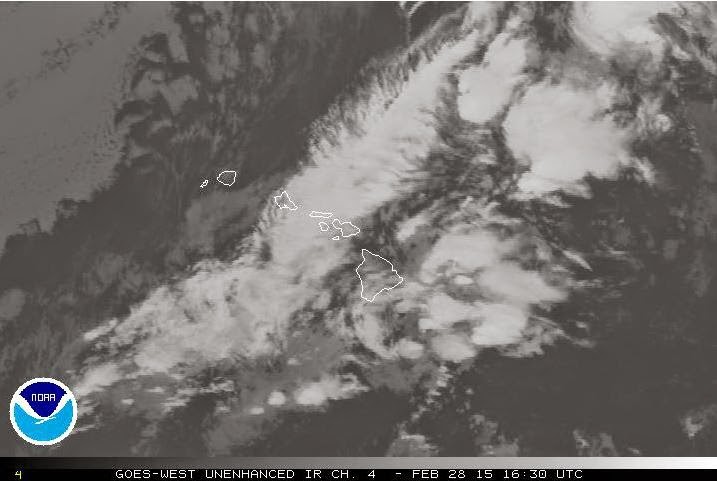 Have fun (not) in the sun everyone!


PS. All the sources for this post are permanently linked in the links section on the right of this blog.
Posted by cammar at Saturday, February 28, 2015

The reason I don't use body parts to describe wave height is that I'm taller than most people (6'3") so my shoulder high wave is head high to most others.

So your body part scale is just as subjective as the HI scale.

Thanks for the link Geoff. I started reading it all excited, but it was way shorter than I hoped.
I like the quote from Pat Caldwell though.
Somewhere he once published a great article with pictures of surfers on different size waves and overimpressed the sizes measured in body parts and in feet (faces). Head high was five feet face, I think to remember.
And, the large majority of the surfers are about 5 feet tall when bending their knees on a surfboard.
And even if Doc is maybe 5'3" when bending his knees on his surfboard, it's still more precise than a scale in which 5 feet (for some people) mean waves that would scare the hell out of me.

GP, why did you remove my comments?