Yesterday started with glassy conditions. Not sure what time Jimmie Hepp took this picture of Toddy, but it does show a bit of texture already. I only lasted one hour, because I surfed that super bowl too much yesterday. 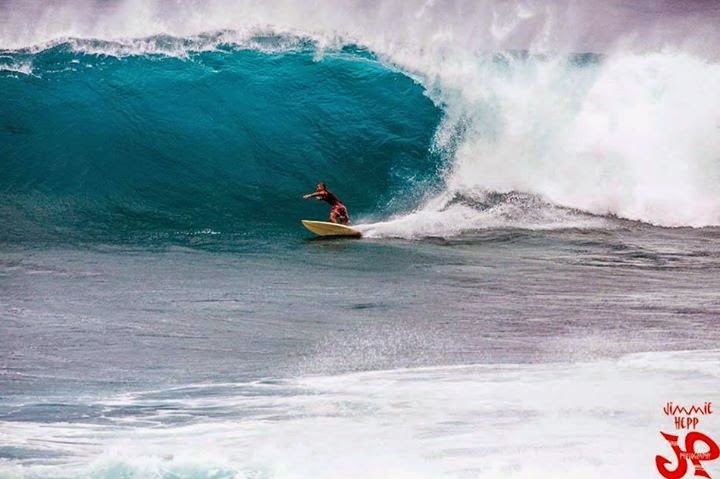 Later the kona wind progressively increased until blowing pretty hard in the afternoon. Browsinho destroyed everything and commented:"that was the worse beating I ever had at Lanes!"
Rather than showing the radical conditions, since I hate strong wind and since it recently ran into it, I'm gonna post a shot from January 2005. It's LIGHT kona wind at Lanes and the sailor is Robby Seeger, who was at the top of that game back then. How big, nice and clean!
The photo is taken from a post on this same blog which, in case you don't know, exists since 10 years. That's why the total counter of page views says what it says (sorry, someone was doubting).
Back then facebook wasn't big yet and this blog was the only place where to check photos of daily action at Hookipa. Fortunately now there is facebook and plenty photographers, so I can focus more on commenting forecast and conditions. 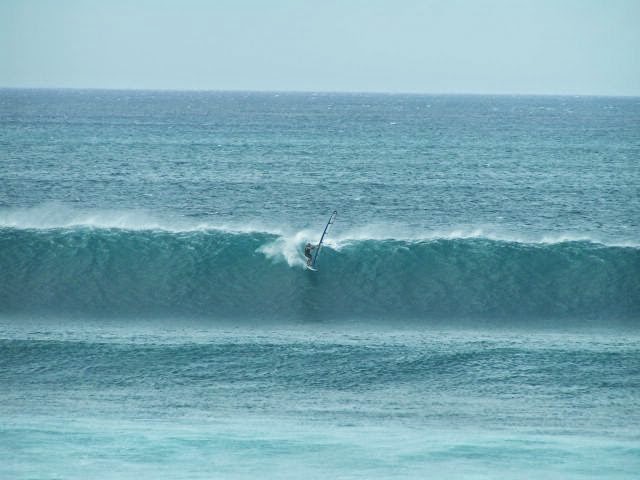 Buoys show the northerly swell that peaked yesterday afternoon.
Notice how the travel time is less than usual due to the northerly direction of the swell. Almost the same peak time for Oahu and Maui. I chose not to sail those horrible kona conditions (sorry, that's my opinion, of course) and went surfing instead. In other words, I was in the water at sunset when the swell peaked at 8f 15s from 355 and I got scared by a couple of sets.
Went down a bit during the night, but it still shows 6f 14s at 5am, so no shortage of waves today either, since it should stay pretty steady, maybe losing a foot or two. But the problem is the wind.

The wind map shows the usual sleep tranquilizer fetch NW of us, but it also shows the strong kona. 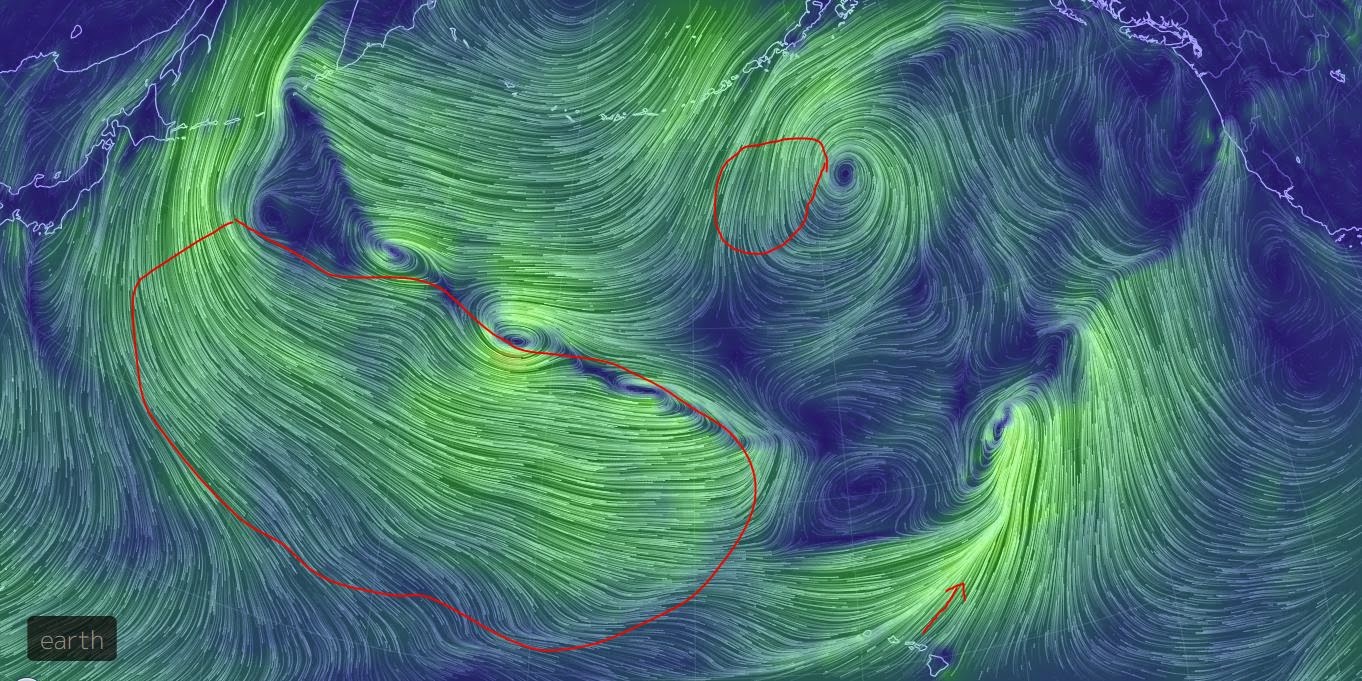 Which is shown even better in the closeup. 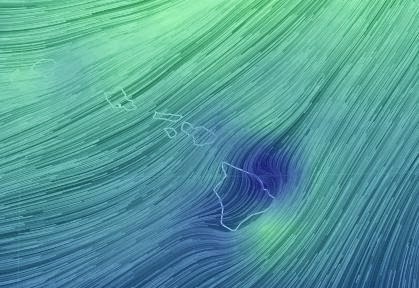 Maui County @ 2km is a great site for short term wind prediction, but they're so fickle with the updates. This map is this morning's 7am map, but it was generated more than 24h ago, which makes it less reliable. I post it anyway because it gives you an idea of how, when the wind is so strong, there's almost no escape from it.
Strong wind sucks, no matter where it comes from.

This website doesn't do forecasts. It selects the meaningful ones, puts them together and comment them with the author (strong) opinions. 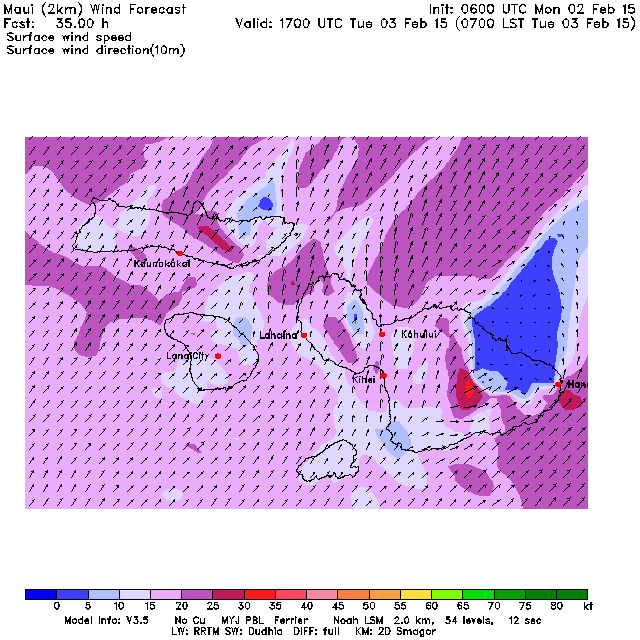 Just for curiosity, let's keep an eye on the south Pacific. Unfortunately, as we said yesterday, that sweet south swell will be devastated in 7 days by the strong kona that will last a week or more... 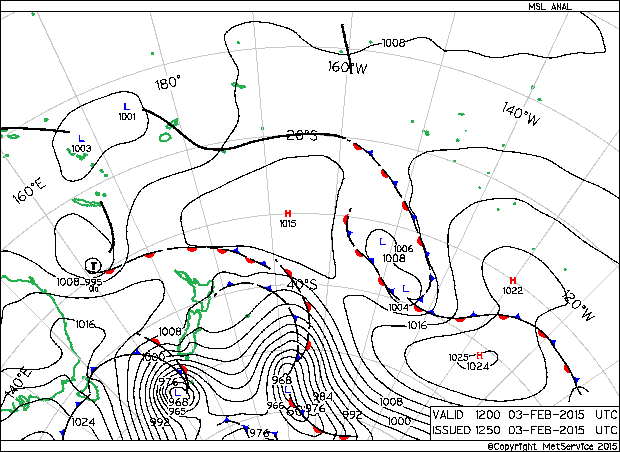 And talking about long term wind forecast, I'd like to congratulate the Windguru guys for (finally) putting 10 days instead of 7 in their brilliant table.
These guys don't do forecasts either. No one does really. The mathematical models of the atmosphere do the job (and whoever wrote them). A forecast website is good when it finds a good way of graphically representing the forecast. Winguru's table of the GFS model's output has always been everybody's favorite because of how schematic it is. Even better now with 10 days!
Just don't look at the waves on Windguru. It only shows the main swell (unless you scroll down and try to read the more cryptical  second table) and the sizes are often questionable.
For that, I check Surfline instead. 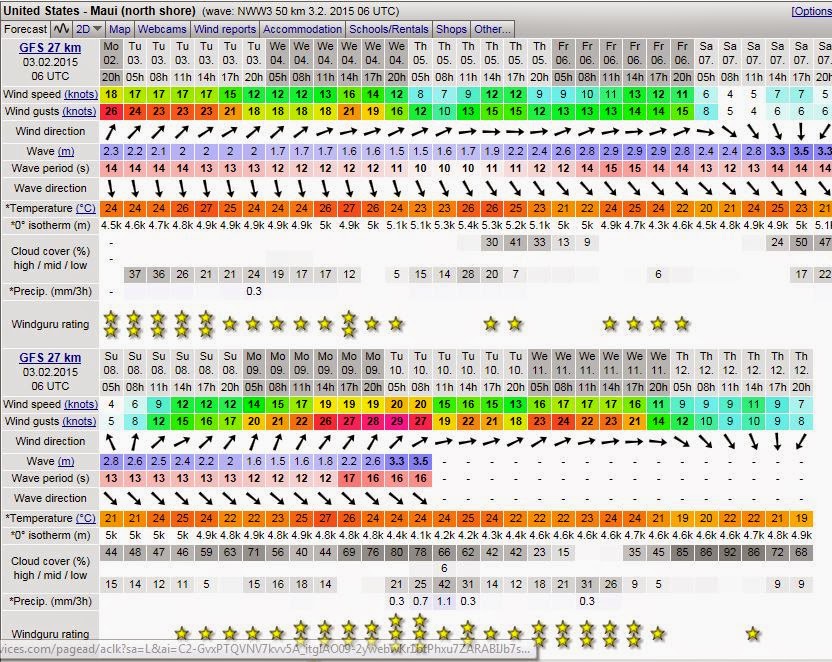 PS. All the sources for this post are permanently linked in the links section on the right of this blog.
Posted by cammar at Tuesday, February 03, 2015