Here's two things I can say about yesterday: if you surfed Hookipa, you sure had a workout (that's what it looked like), but you might have enjoyed the lack of crowd, specially after one of the most crowded days of the year (that was Friday).
If you surfed the south shore with a longboard, you had a blast. West wrap was filling in some spots at solid waist high and it was glassy all morning.

Today's buoy readings show a still healthy 5f 13s in Maui, hopefully a little less work at Hookipa, but since the trades are trying to blow, it's not gonna be clean.
Here's the graphs.
I put a line on the peaks of the swell on the three buoys, so that you can appreciate the travelling time.
If you don't want to get too precise, I also circled the part of the NW buoy graph that you want to look at to have an idea of the swell is going to do in Maui during the day.
The other way would be to look at the Surfline forecast, which is extremely accurate.
Either way, you can see how the waves will go down today. But not that much, maybe a foot at the buoy.

Wind map shows a lovely little fetch in a really good position. Not too far, not too close, not too strong (not a fan of the XL swells), not too weak.
The low associated with it is going to try to push to the east the high that is temporarily creating the trades. As a result, in the next few days we should sit in the area that I marked with an X and that will give the trades a very easterly direction.
I don't mind that at all, since most days like that you have glassy conditions in the morning and light sideoff trades in the afternoon. 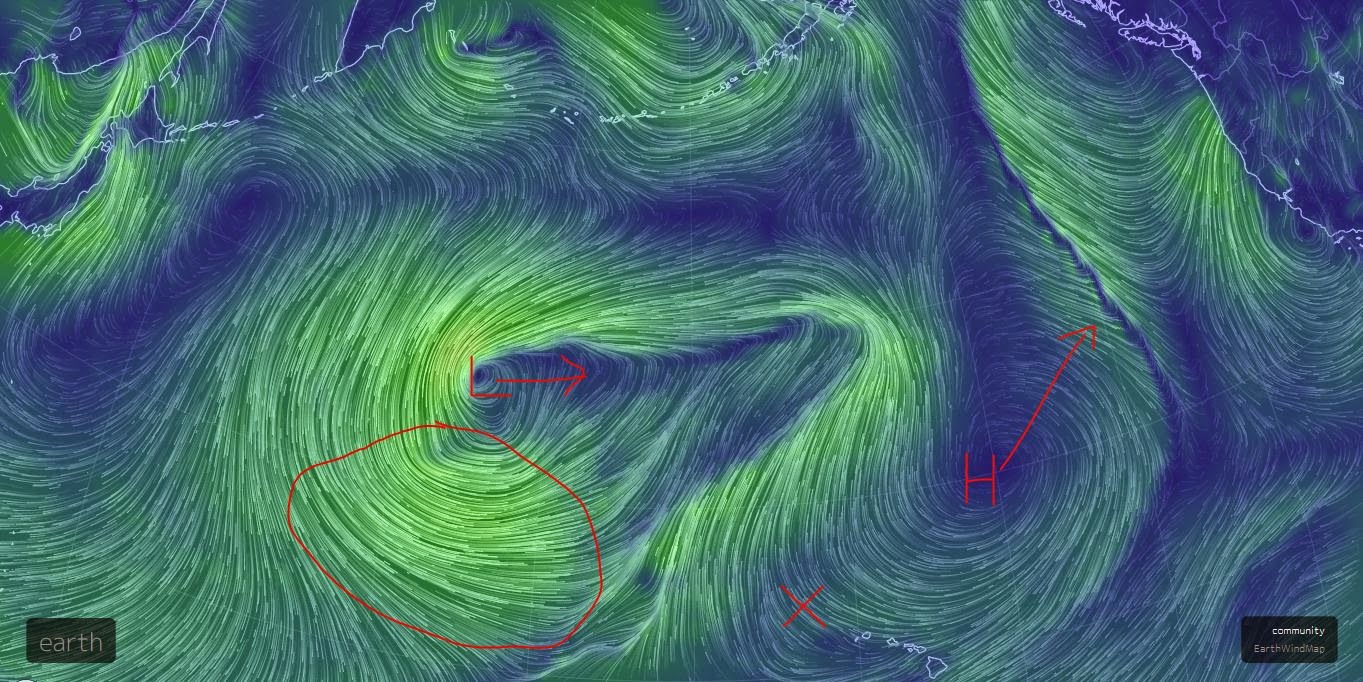 Today (and this morning) trades are sideshore though and that means plenty chop on some otherwise beautiful waves.
It's not that I don't like windsurfing. I just don't like chop on the waves.
The MC 2km map at noon confirms that wind direction. But it's a Sunday, hundreds of windsurfers and kitesurfers have been waiting for a day of trade for a looong time, so I hope Kanaha and kite beach will be packed with colorful sails and everybody will have a blast. 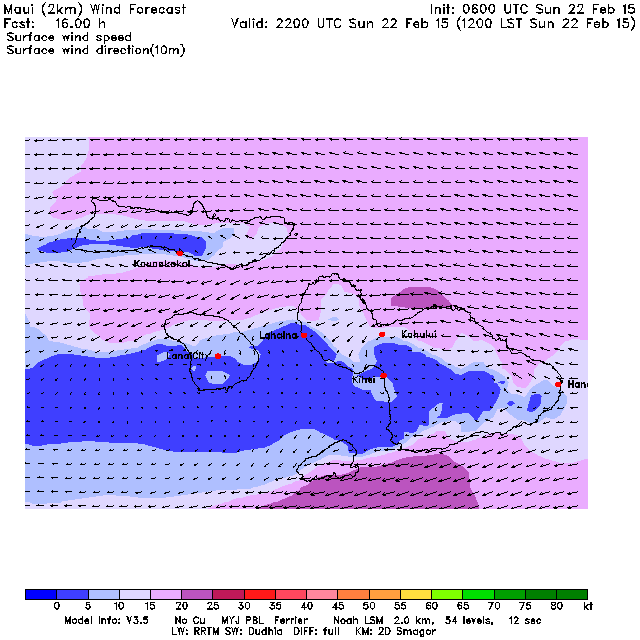 That'll be it for today, but let's pump some frothiness.
Here's what Dr. Hall posted on FB yesterday tagging me:"3' @ 18 sec. from 170 deg (SSE). Just saw it on the 10 day forecast. Visions of shoulder high noserides come to mind."
Here's what I commented:"the website I check every day for the south swell gives just a couple of days of future modelled weather map, but with a nice resolution around New Zealand. Then I have the 14 days Surfline Maui south shore forecast, but I don't check that often in winter time. In other words, you found out before me! You're gonna be on tomorrow's morning call!!!"

That is weather map that is modeled for this coming Tuesday. Fetches in that position down there usually generated swells that take around 7 days to reach us, so think about Monday/Tuesday in 9 days".
Keep also in mind that south swells never last only a couple of days, because since they travel so long, they also spread out a lot, with the long period waves arriving days before the medium and short ones.
That particular swell is gonna miss out to the east, but we're gonna get the angular spreading (provided that the models are right and that fetch is gonna materialize) and that means a SSE direction and a little more inconsistent than what south swells normally are.
But it might hit parts of the island without much block from lovely Kahoolawe, so... if you guys really wonna be excited about it, I give you permission.
But I'm not. Not in winter time. 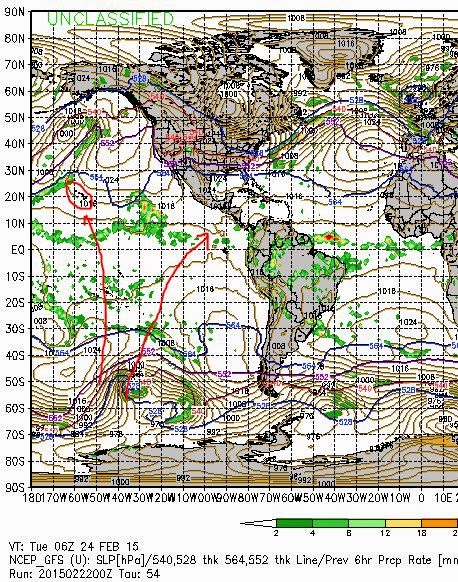 
PS. All the sources for this post are permanently linked in the links section on the right of this blog.
Posted by cammar at Sunday, February 22, 2015