What a fun day yesterday: all kind of action everywhere.

I'm gonna start with Jimmie Hepp's photo of Andrea Moeller warming up at Hookipa for Tuesday's swell at Jaws. Of course I picked one of the best shots, if you check his album on facebook, you'll see that it wasn't always that picture perfect... no desire to be out there for me, I made a good call not to even drive to the lookout. 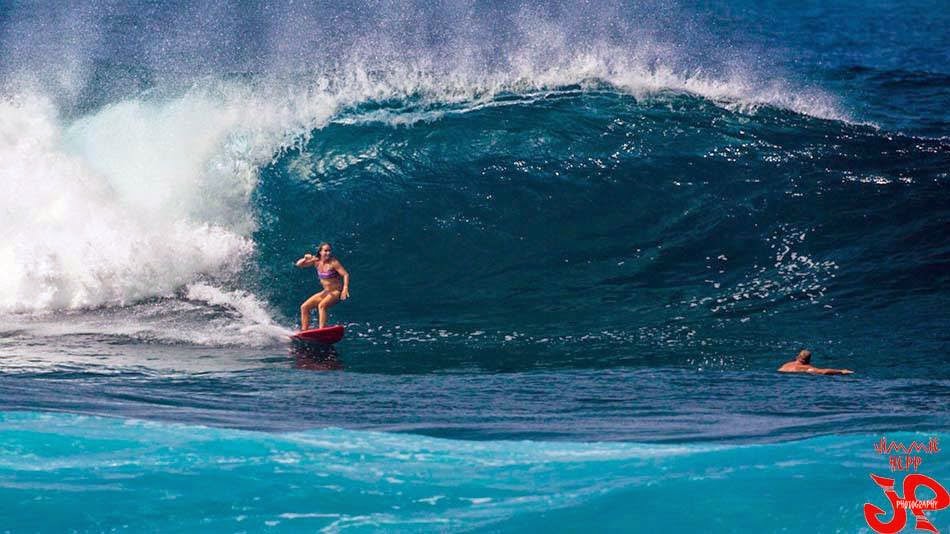 Also because I had two sessions in the early hours, before the wind picked up, then hang out at the beach with friends all day and then went out again for a pretty spectacular sunset glass off. Last wave I caught had the start of the kona flow on it.

It was a friend's birthday and they celebrated it taking out a thing called Supsquatch. Here they go over one under the attentive eye of coach Dave Kalama on the board with his kid.
They asked me if I wanted to join, but they were already five (that's what that thing needs) and, technical as I am, even though I was dying to try it, I didn't want to hinder the performance and I kindly passed.

I surfed with them later on my SUP and they were really laughing and screaming like little kids.
If as adult you can find something that makes you do that, my recommendation is to do that! 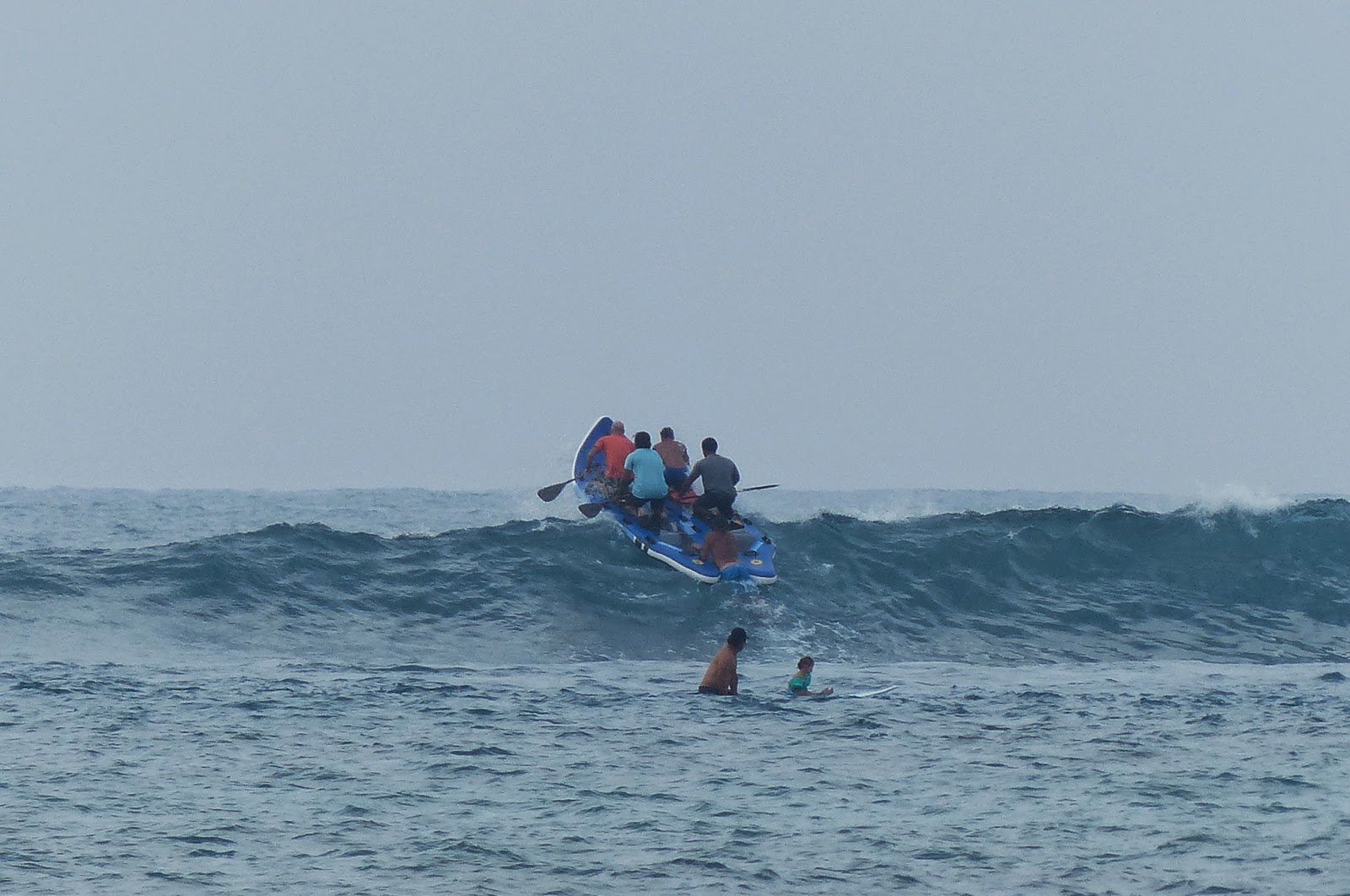 Today I'm not even post the NW and Waimea buoys because they don't show any sign of tomorrow's BIG swell. That means, that we're not gonna see not even a ripple of it today.
You can check by yourself, the link is n.11 on the right.

The second to show that 4ft @ 13s from 227° (SW) reading which is that south swell that I pointed out a few days ago. This is a relatively new buoy and I'm not 100% sure about the travel time, but I'm guessing 3-4 days. Let's see if it will show up at the Lanai buoy sooner or later...

...that translates in the beautiful strong fetch I circled below. That translates in the fact that the swell is going to be long lasting... pretty much all week. It might actually be stronger (or at least more consistent) in the second part of the week in Maui, because of the non shadowed NW direction the fetch has today.

MC2KM not updating his map and no need for windguru either today: it's gonna be kona all day. Probably strong later, so better get your surfing down as early as possible. Definitely sailable in the afternoon at Lanes, but don't forget that the waves are declining all day and they will be relatively small.

I took a teaching job that together with my regular job at Hi-Tech will keep me busy from 8.30 to 6 for the next four days, so my only time in the water will be 6.30 to 8am... that's gonna be tough.
The only thing that will help me is the thought that it's gonna help pay for my Indo tickets...

Don't forget I teach surfing, email me if you need a lesson. Guess what I'm best at? Choosing the right spot... :)

Also, yesterday I met a nice guy from the mainland that is a blog fan. He suggested a donation button, so he could show his appreciation. I did that many years ago, and it didn't work. I'd rather point out to all readers that if you have a business, $50/month for a banner is a great way to support this blog and to help your business.
In case you don't know, other than the additional traffic you might get from the people that actually click on the banner and end up on your website, having your website linked on a blog that has high traffic and is updated frequently (like this one), will help your site's rating and will make it be listed higher when someone's does a related search on any search engine.

Enough of that, have fun in the sun everyone!


PS. All the sources for this post are permanently linked in the links section on the right of this blog.
Posted by cammar at Monday, February 09, 2015

Giampaolo, you should put a donate button on your blog. I'm sure there are many services that will facilitate it. I know I would contribute, as would others. YOUR FORECASTS ARE AWESOME!!!

Yes, I agree! I'm the "nice guy from the mainland" you met, and I know you said you tried it before and it didn't work. But PayPal has a "Buy Now" button, and a "Subscribe" button that cost you nothing to have on your site. Wouldn't that work?
From PayPal:
No monthly, set-up, or cancellation fees. Only low transaction fees.
Buyers don’t need a PayPal account to pay you.