Really small day yesterday. Still fun in the early morning with very clean conditions, not as fun for the rest of the day with some light trades on it.

No pics to report, let's jump straight into the buoys.
The NW one is showing the new WNW swell slowly picking up. Notice the westerly direction (278). I put arrows on the other two buoys to indicate the correspondent points in which the swell is going to pick up in Oahu and Maui, but notice how slow the rise is going to be, so I believe it's going to be small in Maui most of the day (for sure in the morning). The bulk of the swell will hit tomorrow really.
But we wonna be prepared and that's why I'm gonna do some swell direction talk later on this post.

For the moment, let's look at the wind map. Couple of nice goodnight fetches to keep us going and lovely southerly flow that will make for great conditions all day on the north shore. 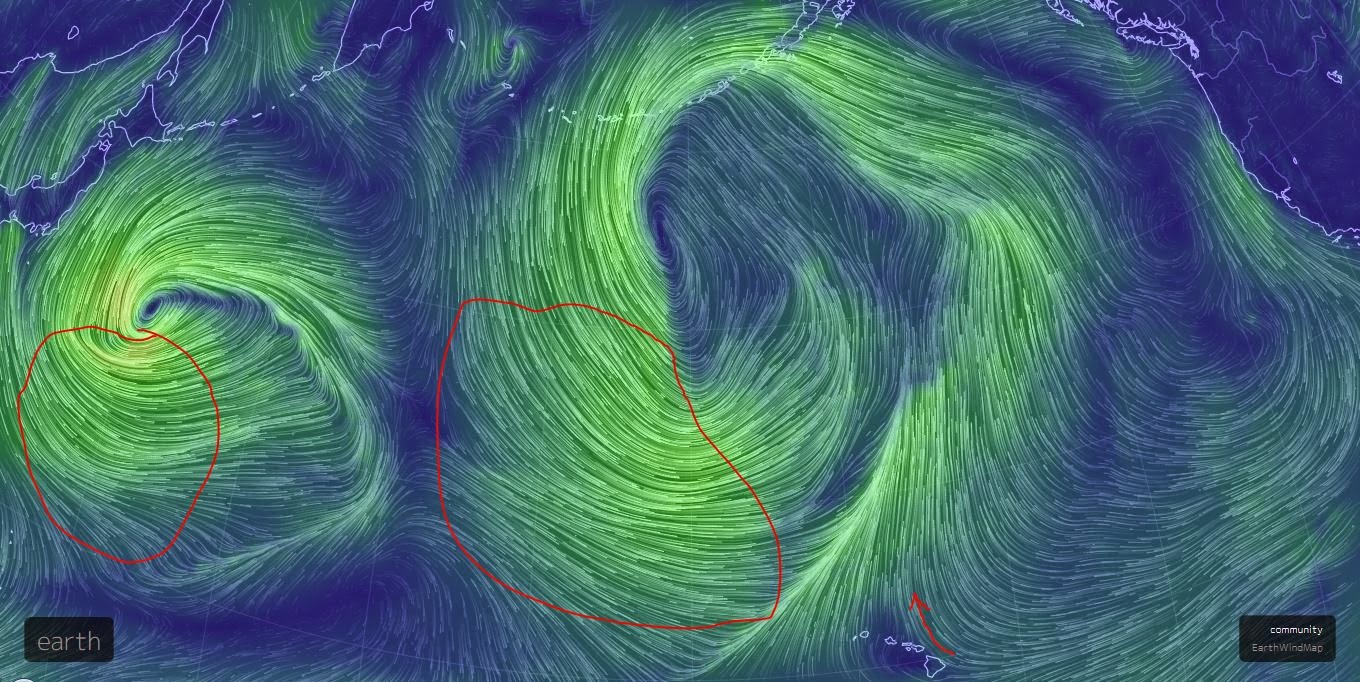 One of the Windguru models actually shows some relatively strong Konas throughout the day. I can only say that looking at the wind map above, I have strong doubts about that. 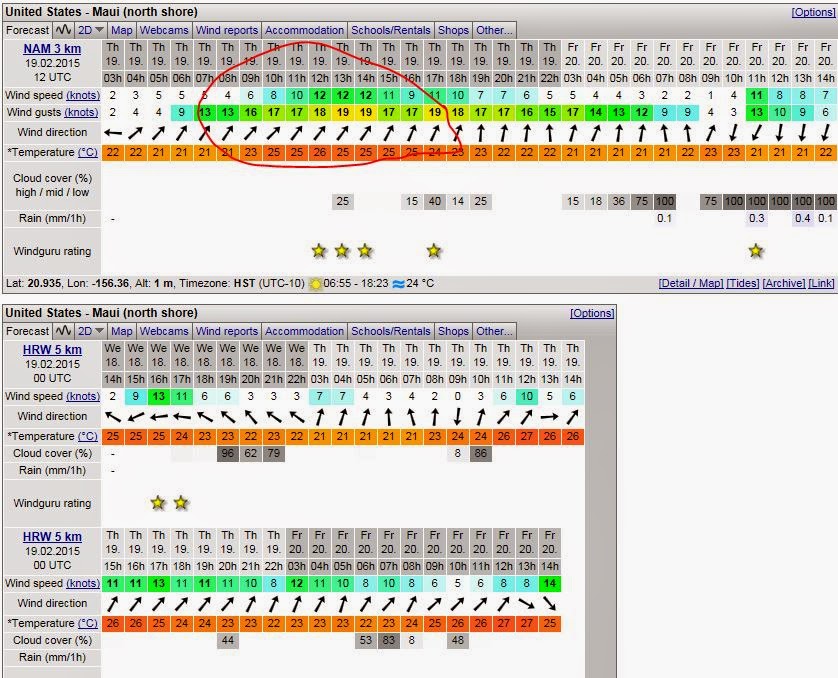 I never talk about tides, because I don't believe they make a huge change in the conditions (the do make some change, but not as relevant as other parts of the world), plus they can be easily checked (link 12) and don't really need to much to comment.
Today though, because of the new moon, there will be a bigger than usual swing. From 2.5f to 0 is the one that put two arrows on. If you're in the water at 7am, you should feel a stronger pull of the water going out than usual.
I also circled the lovely tide swing of sunday night, becaue that shape reminds me of something familiar... :)

Below is a map on which I traced the direction from the NW buoy to Maui. Let's say it's around 310.
So if a swell is coming from roughly that direction, we can be sure that the part of the swell that's hitting the NW buoy is roughly the same that will also hit Maui.
It will be different in size (because that goes down with travelling) and it might also be different in direction (because of the refraction around all the upstream islands), but at least we can count on the NW readings to predict the Maui readings. 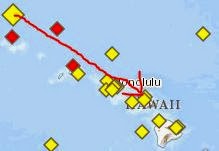 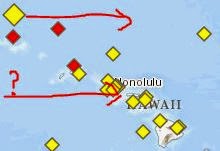 In this other map below, I tried to draw an imaginary big west line approaching the islands. Let's forget about Kauai for a moment (just because it isn't in the map). The part of the swell that will travel south of Oahu, will not be refracted until it hits Molokai and Lanai. I didn't draw the effect of that refraction, for two reasons:
1) not enough room on the map
2) who the hell knows how it actually does that!

But what I wanted to point out is that actually there are a couple of narrow corridors that will allow the swell to hit Maui straight without much refraction. Those two parallel arrows ending on the upper West Side and in south Kihei indicate them.
And I said without much refraction, but there will still be some refraction off the south shore of Molokai and off both the norther and southern tips of Lanai.
Based on experience, the part of a west swell that reaches the upper west side straight is way smaller than the one that reaches the Kihei coast. That's because that corridor is more narrow, and the swell gets refracted more by the coastlines. The longer the period, the more that happens, so in theory a shorter period west swell has more chances to make it through that narrow corridor without being attracted and refracted by the south Molokai and north Lanai reefs.
Whatever travels south of Lanai instead, will only get refracted by the south tip of it and then travel relatively freely towards Kihei. Unless there's a bit of south in the direction (like in tomorrow's case) and then Kahoolawe might have something to say too.
It's really hard to predict the refractions, I'm just trying to describe roughly how it happens.

The angles I drew on the northwestern tips of Oahu and Molokai instead, show how much refraction a swell need to have in order to actually hit the north shore. 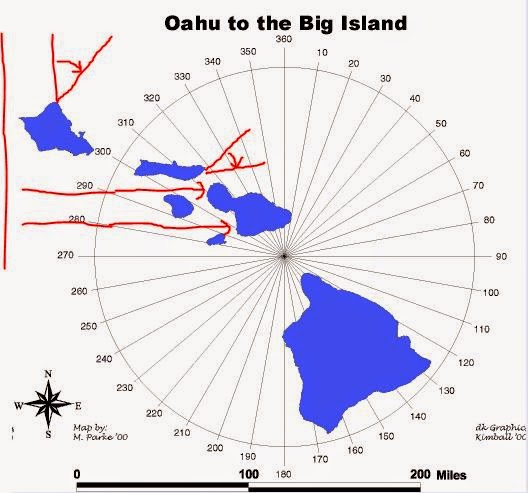 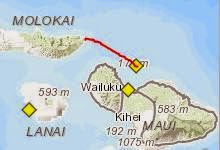 That's all for today, do your homework and start making a plan for tomorrow. And be ready to finalize it and eventually change it with the morning's readings.﻿ Always decide where to surf in the morning, never the night before. You want to have the latest info.

PPS. I labeled this post into the "refraction" category, so that it will be easier to retrieve for future references.

Email ThisBlogThis!Share to TwitterShare to FacebookShare to Pinterest
Labels: refraction

Thanks for the info, really helpful for someone trying to learn all this stuff!