One session for me yesterday, but there were ample opportunities out there.

Obviously the west side offered the cleanest conditions, because the NNE swell had to wrap around and by doing so, it lost its shorter periods component. It still wasn't classic Honolua, it can't be from that direction and with that period.
The Kahului harbor had some clean waves too by the jetty, that's because the narrow entrance also acts as an energy filter. Anywhere else on the north shore the waves were rough but rideable.

I don't have action shots, but I have this one by Mike Waltze, which is a bit of an historical one: the last truck load of burnt canes enters the Puunene mill which has now closed. 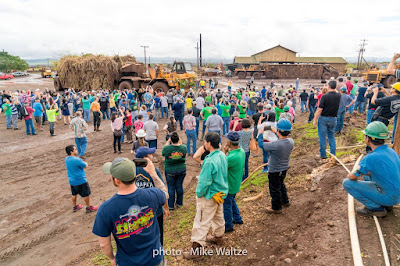 A very controversial matter indeed, here's my unrequested opinion.
I won't miss the burning, that is for sure. The problem is that the alternatives are most likely going to be even worse: Monsanto taking over, real estate development, even just leaving the fields abandoned to the abundant natural dust production, seem to all be really bad ideas. Organic farming doesn't even get mentioned as an option. We'll see what happens.
In the meantime, no more checking the smoke out of the chimney stack to see if the wind is blowing.
Check iWindsurf.com instead or the Kanaha webcam. Much less polluting stuff.

Those lovely out of season southerly small numbers at the Lanai and Barbers buoy, come from that small low NE of New Zealand that I highlighted on the map of Dec 9th below. Lahaina side won't be flat, but unfortunately it won't be clean either because of the local Kona wind flow. Otherwise it would be perfect for my SUP lesson, which I am not going to teach instead, because I only teach with I think the conditions are good for the student to learn.

3.1ft @ 9s from 31° (NE)
Still solid NNE numbers at the Pauwela buoy this morning, but expect them to lower throught the day. Could be 2-3f, 1-2s less tonight.
That 15s NW reading at the NW buoy is coming from the NW fetch I highlighted 3-4 days ago and that energy will make its way down the island chain eventually. My guess is that, at least for today, the NNE energy will still be predominant. Hopefully we'll see some cleaner, longer NW lines by the afternoon, but choose your spots based on the NNE swell is my recommendation.

Current wind map shows:
1) yesterday's WNW fetch that moved north and now is NW of us and in a much better position. Notice also how much longer it got. Also stronger wind in it (bluish color). Related swell forecasted by Surfline at 6-7f 18-16s from 320 on Sunday afternoon.

2) this is a brand new one associated with a developing gale north of the state. Due to its proximity, its related swell is going to have considerable heights, shorter periods, remarkable consistency and lots of energy, too much energy actually. Surfline calls for 14f 12s from 322 Friday night.
As we just experienced with yesterday's (and today's) NNE swell, having the head of the fetch so close to us is not necessarily a good thing. But you just have to look for spots that mitigate those characteristics. That'll be: natural or artificial bays or land points that will filter out some of the energy.

4) a small, not well oriented fetch SE of New Zealand.