Very busy work day for me yesterday, I believe it's worth telling you about.

I first accompanied a couple of intermediate clients that wanted to surf Hookipa before leaving Maui around noon. They had been in Maui for a while, but yesterday was the only day that had a size that they could handle. We hit the water pretty early and they were happy, but quite surprised by the roughness of the experience. As Thierry put it in the lineup, "it's like surfing lake Michigan!". The guy cracks me up.

Right after that, I took an absolute ocean vergin to Lahaina for her introduction to SUP surfing and it was the exact opposite. Sheer glass, knee to thigh high waves, perfection for beginners. I love the variety of conditions that Maui can offer.

Later in the day Jimmie Hepp took photos of the windsurfers and I picked this one out of this gallery. 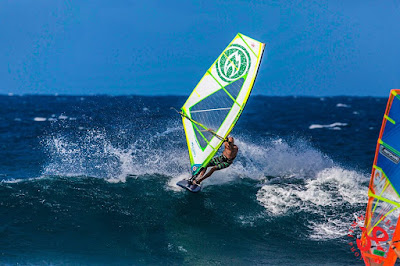 Not sure that is a proper SW reading or some kind of wrap, but, once again, the observation of the webcams will be key in deciding if you want to go there or not.

Wonderful numbers at the buoys, they show the progression of the new swell though the island chain beautifully. Below is the graph of NW, Hanalei and Waimea. On the first one I put two red lines to highlight a rise of 10f (from 2.5 to 12.5) in only 6 hours. For me a foot an hour is already fast, this was almost 2 feet an hour. That is a direct consequence of the proximity of the source. After that, the swell slowed down a notch, but kept rising until it peaked at 15f 15s at around 10pm.

Unfortunately the scales of the three graphs are all different, but you can still appreciate the same steep rise happening down the line.
Pauwela only just starting to get hit with 2f at 18s at 5am, you can definitely expect the same steep rise throughout the day locally.

Directions are pretty consistent at the buoys, we can count on most of the energy to be between 310 and 315. Not the best direction for Honolua, but at this size, it will most definitely squeeze in there and with the westerly direction and the strong easterly trades, the Cave will have gaping barrels. I might go there to shoot myself, but I welcome west side photographers that wants to send me a shot in exchange for a link to their website or facebook/instagram pages.

GP's rule of thumb for the travelling times from the NW buoy (12h 18s, 15h 15s, 18h 12s) says that the peak should happen 15 hours later in Maui (that'll be 1pm), but I got the feeling that in this case it's gonna happen later than that. Sometimes in the afternoon, that's for sure.

Below is the Surfline Offshore Swells forecast (last minute downgraded compared to yesterday), that gives the peak at 8.6f 14s around 8pm. It will be interesting comparing this to the Pauwela graph tomorrow.
The building windswell (red line) is a reflection of the increasing trades and the next swell on Tuesday that should be pretty solid too.

Current wind map shows the following fetches:
1) a wide NW one that is creating the green line swell in the Surfline forecast above
2) a narrow windswell one
3) a weak and not well oriented south one