Don't have an action shot, but I have this one that I took yesterday and that triggers one of my favorite stories. As you can see, when a seal's skin dries it becomes the exact same color of those rocks. I'm pretty sure it's a nature design.

One day I broke the mast while windsurfing. The waves were big and I had to swim to that little rocky bay that is downwind of the Point and upwind of Lanes. Shore break was gnarly and it took a serious effort and plenty swearing to finally get all my shit together back on land. On the Lanes lookout up on the cliff there were a couple of mokes (big Hawaiian dudes) fishing. They were yelling me something, but it was windy and I couldn't hear what they were saying. I thought they were making fun of a haole windsurfer that ended up on the rocks, disregarded them altogether and proceeded to pack my stuff and walk back to my car.

Now try to image this scene.
I was all taken in my thoughts, carefully balancing between those rocks, all of a sudden the big smooth one on which I was about to step on next... not only moves, but turns its totally unexpected head (since when rocks have heads?!?) towards me, barking out a loud a very intimidating sound and showing me a huge mouth with a remarkable collection of teeth.
I was about to step right on top of the biggest seal I've ever seen in my life and I had no idea about it until the very last moment. If I didn't have another heart attack that day, I think I'm good.

Extremely scared and shocked, I stepped back (more like jumped back) and tried to calm the massive wild animal of which I blatantly invaded the private space of, with sweet sentences like:"it's ok honey, I'm gonna walk away from you, sorry about that..."
And right after that happened, I could finally hear the fishermen laughing and screaming:"we told you that was a seal!" 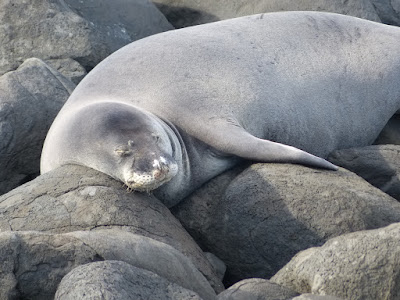 4am significant buoy readings
South shore
No southerly energy recorded by the buoys, check the Lahaina webcam to assess the degree of flatness.

What most surfers did not realize (unless they read it here) is that for the last 4-5 days most of the energy in the water was from the northerly swell. That moderate low sat north of us almost stationary (now it's slowly moving NE) and provided a steady supply of 3-4f 9-10s waves. The wind has been pretty much absent (at least early morning) and as a result, the conditions have been remarkably consistent. Every morning I look at them they look like the day before.
December 4 was the first day of the season that I gave the conditions an excellent score (8-10, as for the WSL definition, of course) and since then, the score has been consistently oscillating around 8. I did go back and changed a couple of 7s into 8s, because they were underscored and I'm going to use those numbers for stats. I guess I'm doing that already right now.

That might change this morning, because yesterday at sunset the light onshore wind made the conditions look like a 3 in comparison (even though I heard that it was better than it looked). We'll see how much sickness has been left in the water during the night. But size and consistency of the waves should be pretty similar to the last few days. And I'm really comforted by 5am reading of 2mph from the south at the iWindsurf Hookipa sensor. Stay tuned for the beach report for that.

Current wind map shows a wide and strong NW fetch and a narrow, well oriented towards us NE one. Both will generate remarkable size swells: 8.6f 11s from 24 at 2pm tomorrow and 12.7f 14s from 319 at 8pm on Friday. When yesterday I mention that the Friday one will light up Pipeline, I forgot to check the wind, which is forecasted to be Kona and which is pretty bad there. But we know that it's pretty good over here instead.

That is to satisfy the curiosity of all the surfers that need to know what's ahead. I used to be like that too, but, thanks to my wonderful lifestyle, I don't need to utilize precious and rare still functioning brain cells to remember that anymore. I wake up early and surf everyday no matter what. Knowing that Friday there's a big NW swell won't make any difference at all, if not maybe creating some kind of expectations for the future.

There's also a bit of philosophical approach to life in that. I try to live the present rather than projecting in the future and what's ahead. The future is something that does not exist in reality, it's only in our minds. So, PLEASE, if you see me around don't ask me when is the next swell going to hit, because I seriously don't know. Even if I mention something about it here (like I just did with those two swells), I will forget as soon as I'm done writing about it. All I know is the conditions for the day. Thank you very much for that.

Just like yesterday, the bad news of the day is the onshore flow that is clearly shown in the NAM3km map at noon below.

PS. I've been told that I confused Cody Young and Tanner Hendrickson multiple times. Sorry about that.
Posted by cammar at Tuesday, December 13, 2016