Full day of work for me yesterday, but I did get in the water to teach a lesson.

Thanks a lot to the blog reader that sent me this photo of the Bay yesterday. I really appreciate any photographic report from the readers, specially the west side ones. My email is on the right or you can send me a message on Facebook (Giampaolo Cammarota). Thanks. 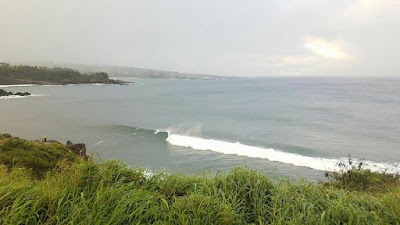 6am significant buoy readings
South shore
Nothing at the buoys, but yesterday morning Lahaina was knee to occasionally thigh high and clean.

The shadow line from Honolua to Molokai is 335, but in my experience everything past 330 hits it. Remember, a swell never comes from exactly only one direction. It's more like a range of directions. For example, the Pauwela reading at 6am says almost 5f 13s from 332, but there will be sets that come from possibly plus or minus 15 degrees. How wide the range is, depends on how wide the fetch was. And this was a pretty wide fetch, as we'll see better below.

That's why Honolua looks so good in that photo above. And it should be good today too, just smaller. In the NW and Pauwela graphs below, you can in fact notice that this very long lasting swell is finally starting to decrease (dark blue line for NW and light blue line for Pauwela).

I also pointed out a couple of changes of directions at the NW buoy. It first got more westerly around midnight yesterday. I don't think we've felt that at all in Maui. Then it veered again more west yesterday evening and now is reading 291 degrees, which would mean almost no energy hitting Maui's north shore. Instead, I still don't think we'll feel much of that in Maui. Why?

Because the buoys don't have to be blindly trusted, but heavily questioned. That's why I call them the bible (which is something I have no interest in reading, but that's the approach I would have if I had to read it). Below I put together the wind maps of Dec 17, 18 and 19. They all show a solid, wide and almost stationary fetch and that explains the three days of solid surf we have just experienced. I don't see the fetch moving south so, despite the change of direction at the NW buoy, I still think we'll see plenty energy today. We'll find out.

This is a late call and the MC2km maps are updated. This is the noon one and it shows easterly trades. 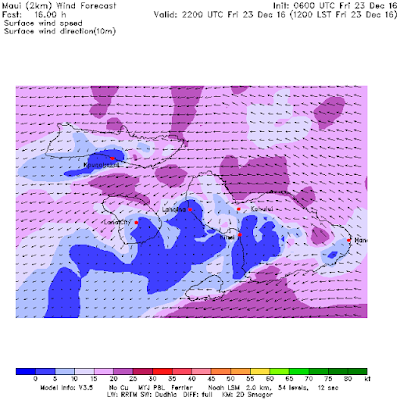