Spectacular day of surfing all over the north shore yesterday.
I had an extremely busy day, since I managed to fit in: 3 sessions, a nap, a laundry and a very interesting lecture by Irminne Van Dyken MD. The title was: “Immunonutrition: The Interrelatedness of Diet, Nutrition, the Immune System, the Microbiome, Telomeres, and Longevity.”. The talk will be available soon on the Vegetarian Society of Hawaii website. Highly recommended.

Here's one of Maui's slabbiest waves in a remarkable photo by John Patao. For some reason, that place scares the hell out of me. I'd rather paddle out at Jaws than there. 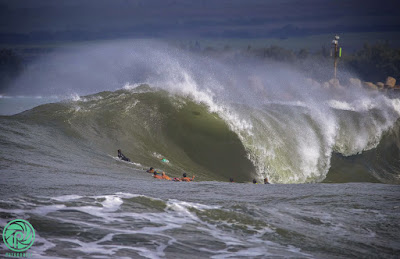 I'm quite proud to have caught Clay Marzo inside the barrel of this other slabby setup. He was out there by himself (with a water photographer, of course).

The inside wasn't that light either.

The massive numbers at the NW buoy are easily explained by looking at the current wind map two pictures  below: it is in front the strongest fetch of winds of the low that formed yesterday just NW of us. Pretty much where the number 2 is. Most of that energy is missing Maui to the west at the moment, (fortunately, I'd say!). Oahu is more west than us, so it is getting more of that as the Waimea reading shows.
But we will get slammed by it eventually later in the day as the Surfline Maui North Shore open ocean swells forecast shows below. That is the only "pure" wave forecast website I check. Three days are free, you can see 14 days with a subscription (link n. 15 in the GP's meteo websites list).
Btw, I also replaced link n.0 with a shortcut to the map with the position of the Hawaii buoys, for quick reference.

As you can imagine, when that stuff hits, it's gonna be the predominant energy in the water. But not the only one. Here's a sentence from Pat Caldwell, referring to the long period NW swell that was generated by those distant fetches in the Kamchatka corner in the last 3-4 days :"It should pick up (in Oahu) near sundown 12/15 from 305-315 degrees, peak Friday near the active season, September to may, average, then slowly decline 12/17. A rough, larger, nearby source will make it hard to distinguish the remote source on Friday to Saturday locally."
That long period NW energy is actually showing only at the N buoy, but that's only because all the other buoys are "overwhelmed" by other swells.

Lots of stuff in the water then, you might want to keep an eye on the ocean, because the onset of the big, rough, closely generated NW swell will be quite sudden. In the meantime, I'm gonna focus my spot search on the remaining energy from the NE that reads 6.4ft @ 12s from 51° at 4am at Pauwela.
A suspicious (the days at the bottom are "fresh", but the time stamp at the top right is not) MC2km noon map seems to be already updated while I'm doing this call. Moderate Kona is on tap for this afternoon, and if yesterday it wasn't quite enough for sailing, today it should. With the massive NW waves predicted for the afternoon, it could be an epic show with the windsurfers at Lanes. 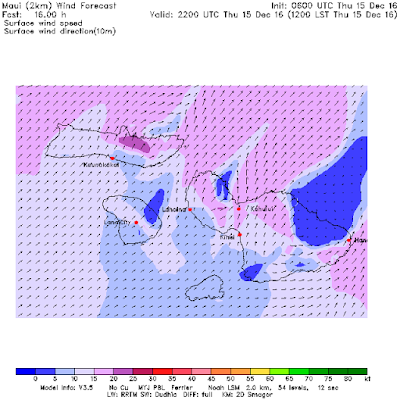 The noon Kona prediction is confirmed by the NAM3km model.

Current wind map shows:
1) this fetch was much better oriented yesterday, so not much wave generation for us today. Not that we need more of that at the moment...
2) the culprit for this afternoon's steep rise of rough surf that is hopefully going to look relatively clean only thanks to the Kona wind
3) the remnants of the fetch that generated the actual NE swell. Thank you dear for that, I absolutely loved it
4) a non particularly well oriented fetch down south