Yesterday I monitored the slow rise of the NW swell all morning and then I decided to surf the windswell instead and pulled a rabbit out of the hat scoring a very fun session with just a friend and I.

I don't have an action shot, here's a surreal December 2016 sunset by Jimmie Hepp. 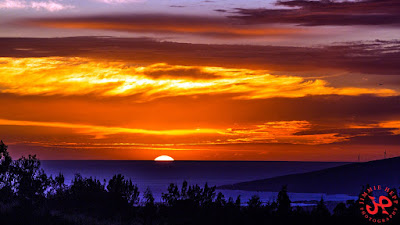 4am significant buoy readings
South shore
Both Lanai and Barbers are "overwhelmed" by the WNW swell, the only way to check the size of the waves in Lahaina is through the webcam. The map below is from a week ago Saturday Nov 26 and it shows a strong fetch in the Tasman Sea, so it might be worth doing that. I noticed that those Tasman Sea swells take a bit longer than the ones coming from a straight south direction, so it might be a bit early for that. It's like there's more traffic on that SSW highway.

3.5ft @ 16s from 328° (NW)
Below is the graph of NW, Hanalei and Pauwela and the sizes the swell reached respectively were: 8, 7 and 4 feet. I spent plenty words (probably too many) in yesterday's post to explain the reason for that. I actually added more explanations about refraction later in the morning, so read it again if you're interested in such topic.

For today we can expect the swell to hold to similar sizes eventually coming down a second or two with the period.

This is the Surfline forecast that I posted on Dec 1st. I'm posting it again to show a pretty rare case in which it was a bit off with the numbers. The 4am arrow was 4f 18s, while Pauwela instead read 3f 18s at that time. Then they called it to go up to 6 feet, instead it only went to 4f. It's so difficult to predict the effect of the refraction, that I don't feel like calling that forecast all that wrong at all, really. The curve and timing was still spot on if you compare it with the Pauwela graph.
I'm pretty sure the tab with the wave faces numbers was much more off, but, as I often repeat, I never even look at those.

Couple of words about the contests. I only watched heat 1 of round 3 of the ladies at Honolua (Tatiana on a tear!) and then judged it too slow/small to be entertaining... this year they have been unlucky. So I swapped to the Sunset Beach one, but I'm still watching day 1, so I don't know how it was yesterday, but I'm sure it was pumping. Both contests should still be on today.

NAM3km map at noon shows a bit of an onshore flow, so catch the waves in the morning!

This is the 5pm map instead and it shows a bit of a Kona flow. Waves should be very clean at sunset, but I work till 6 and right after that I'm gonna go to the MACC and ask William Finnegan a question I have since I read his wonderful book "Barbarian days". Best surfing book I've ever read.