A surf and a sail for me yesterday, both pretty bad because of the poor conditions.

This photo by Jimmie Hepp from this gallery summarizes well the wave size that was still in a fun range. The problem for both activities was the wind coming from a side-on direction (at least when I was there). At sunset the wind relaxed a bit and the waves looked kinda fun. 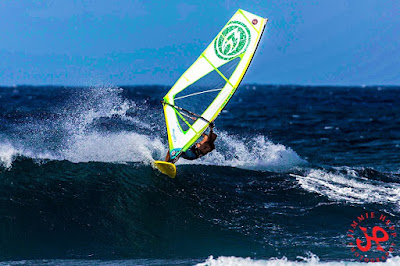 1.5ft @ 11s from 207° (SSW)
That's minimal energy from the south, check the webcams to see if that's enough for you. The Lahaina webcam has been showing more energy than the buoys would suggest for at least a week now.

The NW buoy is in the middle of an intense (30-35 knots) circulation around the strong high pressure that has set up north of us, and in particular is right at the end of the fetch n.2 in the current wind map picture below. If you don't know/remember where the NW buoy sits here's two tips for you:
1) check the link n.0 of GP's meteo websites list in the right column of this blog
2) mentally draw a line from Maui to Kauai and continue for another Maui to Kauai distance. That's where roughly the NW buoy sits.
And now that you know where it sits, you should be able to answer this question: how much of the 14.4 feet hitting it are going to hit Maui too? None. Not even a toe.
The reason is that they come from a NE direction and they will keep travelling that way. They're gonna hit the Marshalls, not Maui. But it's just a matter of time because that fetch n.2 is aimed at us too (specifically, the part that I circled) and sooner or later we're gonna get hit by some short/medium period energy. Surfline's calling for 6-7f 9-10s for tomorrow.

The buoy to check for that will be the N one, for which I'm gonna give you another rule to mentally place it without having to access that link n.0: take the distance between Big Island and Kauai and the N buoy will sit roughly at the same distance from Big Island, but to the north of it. Maybe 5-10 degrees more to the east, but straight north of Big Island is good enough.
I put a couple of X's on the map to indicate the position of the NW and N buoys.

NAM3km map at noon suggests that wind/kite surfers might be able to squeeze another day of north shore sailing today. Get it until it lasts is my strong recommendation, because soon there will be a long pause for that.

PS. A reader left a comment on one of my two beach updates yesterday, asking if I thought there was going to be an improvement in the conditions and where to go surf around Paia.
Which suggests me to clarify the use of the comments to all readers.

For the first 2 days after I post something, there's no moderation set and anybody can leave a comment as long as you demonstrate you're not a robot with those tests like the spotting the street signs etc...
I encourage everybody to leave comments. I promise to reply to all of them (the ones that imply a reply, of course), but only the day after, not right away.

If you need help with deciding where to go surf, you have to ask me for my phone number via an email or facebook message. And you have to pay the very low fee that I'll set up for my new PCM (Personal Call Maker) service, for which it seems I might have a first customer already!

Obviously, Hi-Tech rental customers get the service included in the rental fee as long as they ask me when I'm at the shop.