Double session for me yesterday, both really good thanks to the lack of wind. What I enjoyed the most was the paddling back out after a wave: perfectly smooth, no chop, no wind, no spray in the eyes.

I don't have an action shot, so here's coworker Ariel showing another Jimmy Lewis board we just received. I'm no team rider or anything, I was just impressed by this longboard when I unpacked it.
It's a 9.1 Thai Stick, it's 22 wide and I measured the thickness in the middle at 2 3/8! An extremely thin and high performance shape that I could comfortable carry under my arm like it was a shortboard. I don't do much longboarding these days, but I sure wouldn't mind owning that one.
On the background, a small part of our vast fleet of rental windsurf boards. 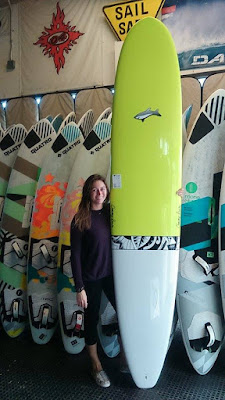 5am significant buoy readings
South shore
Nothing at the buoys, check the webcam instead.

1.8ft @ 8s from 49° (NE)
Before I discuss today's readings, let me quickly inform you that yesterday the Bay was completely flat. That confirms that the NNW direction of those 4f 14s readings at the Pauwela buoy was wrong. That was instead a WNW swell, the first one that Pat Caldwell mentions here: "Mid Thursday on northwest to northern exposures has a mix of declining swell episodes from 300-320 degrees and 010-030 degrees, respectively". "The Thursday 12/8 WNW surf was generated west of the dateline last weekend. It should slowly fade out Friday".
Today we have a completely different situation. ALL the buoys are showing energy from a much more northerly direction. And here's again what uncle Pat has to say:"A nearby low pressure has formed about 600 nm NNW to N of Hawaii 12/8." (you can see it on yesterday's and today's wind maps)
11 am HST 12/8 ascat-b satellite showed a compact area of gales aimed at targets west of Hawaii. Given a similar pattern last week that manifested into higher than expected surf locally Sunday 12/4, this feature deserves attention. Models show the low remaining nearly in place with a trend for the strongest winds to aim more westward, that is, less at Hawaii.
The head of the fetch is about 500 nm away on 12/8, which should allow a rise locally mid to late Friday from 340-360 degrees from angular spreading. This makes for large error bars on the specific heights. Stay tuned to the latest forecast updates, which can be fine-tuned with the latest buoy data and surf observations.
The low pressure just north of Hawaii 12/8 is expected to be long-lived and slow in movement. It will likely keep NNW to N surf into Monday 12/12 at levels below the active season, September to may, average.
So, is the NNW energy at the buoys already the one coming from the close by low? I don't know, but for sure the direction of the readings seems much more reliable today. So without worrying too much where it's coming from, I think we can count on those 3f 13s. That should be a fun head high size at Hookipa, stay tuned for the beach report (running a bit late this morning).

Current wind map shows a decent NW fetch and a couple of small/not ideal ones related to that low north of us. I like also that one in the Tasman Sea, but we need to check tomorrow too to know if it's gonna do anything for us (probably not).

Lastly, here's another entertainment opportunity. This movie will be on at the MACC Dec 17th. I've seen the previous ones and the photography has always been outstanding. Here's the trailer, additional info on their facebook page and you can get your tickets here.


Oh, some people care about the rain, so here's the 6.05am rain radar.