Just one session for me yesterday. After the morning sickness healed, the waves turned real clean and the point was firing some beautiful  rights (8.5 was the highest score I have given so far). I saw Deneb screaming down the line all the way from Green Trees (also known as Point Deneb) to the channel at least a couple of times. My best wave was a left though, that I caught at Chip's spot. Which, unless you dawn patrol The Point, you might not have any idea of where it is, and that is ok.

Later in the morning and until about 5pm a light sideon breeze picked up and ruined the shape a bit. That thinned out the crowd, but at sunset it was packed.

This is Sean Ordonez on a short shape of his. Photo by Jimmie Hepp out of this gallery. 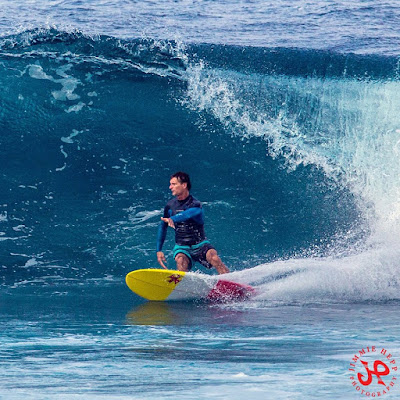 Pauwela
3.9ft @ 11s from 355° (N)
3.7ft @ 9s from 28° (NNE)
2.1ft @ 16s from 333° (NNW)
New NW swell on the rise, while the northerly energy eases (but not much) on Maui's north shore today. Below on the left is the graph of the NW buoy. I marked the relatively slow rise from 3 to 6 feet. Applying GP's rule of thumb for the travelling times, we know that 15s take roughly 15h, so I marked the equivalent points on the Pauwela graph on the right. The size will be obviously smaller because of the energy decay due to the travel. We have 2 feet at 4am, we should see something like 4f at sunset. Not a good direction for the west side, but let's not forget the 4f 11s from the N that are still lingering in the water. Yesterday that was 5-6f and 12-13s and the Bay was chest high. Gonna guess waist high today, but don't go in the morning, might not break at all on the high tide.

Let's have a look at the fetch that generated the new NW swell. Below is the maps of Dec 2nd and you can see how distant it is.

Didn't change much on Dec 3rd.

Current wind map shows the fetch in the NW corner that we also saw yesterday. It's going to move up and stop making waves for us soon and it looks a lot like the fetch that made the current NW swell that I just illustrated above. As a result, the resulting swell next week should be very similar in size, direction and consistency. Similar, but not exactly the same. They never are and that is a blessing because thanks to that, surfing is never repetitive. I have a hard time explaining that to my dad: "don't you get bored of doing always the same thing?"
Obviously, he never surfed.

NAM3km map at noon shows again the annoying tradish breeze which is not good for anything, really. But I'll take it better than 20 knots.

As I wrote many times, I absolutely loved the book Barbarian Days and I had no problem spending $28 (I'm notoriously extremely frugal) to go listen to a speech of the author William Finnegan a few days ago at the MACC. I also wanted to ask him a question that was haunting me since I read the Fiji chapter of the book:
Him and a buddy were exploring waves in Fiji and somehow managed to find out that someone else just discovered this amazing left hander right in front of a uninhabited small island called Tavarua. They hired some fishermen that reluctantly take them there and camped on it in absolute solitude for weeks.

My question was:"I understand that as long as Restaurants was working, you guys didn't have any interest of exploring anything else, but in the flat spells didn't you feel like checking out Cloudreak? I couldn't believe it doesn't even get mentioned in the book!"
The disappointing answer was:"we couldn't see it!"
And my reply (still hanging tight on the microphone that the usher wanted to take away from me):"what about Pools in Namotu, it's right in front!"
"We couldn't see it either".

Well, at least my curiosity was satisfied. The speech was short and the rest of the time was dedicated to a long Q&A session. I left early after I realized that he was more interested in answering political questions (he works for the New Yorker and has travelled the world as a journalist) than surfing questions.

Here's a 5 minutes video of Mr. Finnegan reading a pass from his book. It's a pass that describes his experience surfing Honolua Bay in the 70's. To understand it better, you need to know that prior to that pass, he had a board shaped by Les Potts as a gift from his girlfriend Karen. Potts seemed to do more what he thought was going to work, rather than listening to Finnegan's inputs. Finnegan was able to finally do some changes when the board got in the hands of the glasser (a guy called Mike).
Enjoy.